The fundamental tactics of a 3-5-2 formation

The fundamental tactics of a 3-5-2 formation 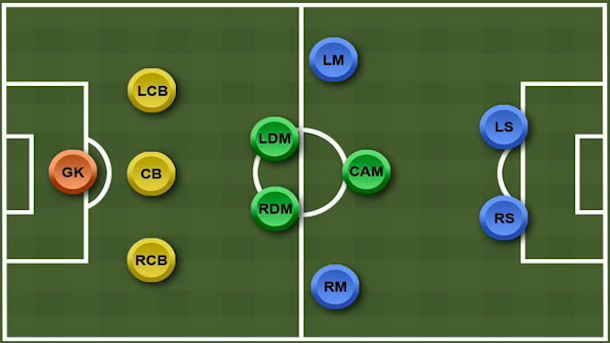 The 3-5-2 is an extremely versatile formation that modifies itself throughout the course of a game forming a stout defense and a powerful offense.

The keys to a successful 3-5-2 formation are a dominant and cohesive trio of centerbacks, versatile players to play on the outside of the midfield, and a pair of dynamic strikers. The best professional example of a team that uses the 3-5-2 is Juventus, one of the top Italian teams in Europe.

Communication between the three Center Backs is essential. In most cases the three central defenders need to move as a unit.  The trio must be aware of how much space is between them and they must maintain a linear shape to prevent attackers from making runs behind them. However in counter attacking situations if an opposing attacker cuts inside the closest Center Back must quickly realize this and pressure the ball while the other two cover the space behind him.

In addition to traditional skill sets required from central defenders in four at the back formations, such as phenomenal positional awareness, strong tackling, and the ability to win the ball in the air, Center Backs in a 3-5-2 formation require more speed. They need more speed because there are not traditional Left and Right Backs to match up with opposing teams pacey wing players.

The three Center Back strategy that the 3-5-2 utilizes is particularly successful against teams that play a formation with two Strikers, such as the 4-4-2. Reason being the two opposing forwards are now going head to head with an additional Center Back. Many forwards are not accustomed to this because most teams play a formation that only features two central defenders. On the other hand, when a team plays with only one Striker, the three central defenders can find themselves all marking the same man.

Because of  the constant and fluid transition that Wingbacks make the 3-5-2 essentially becomes a 5-3-2 while in defense. The Wingbacks join the centerbacks to form a singular back line and the CAM drops further into the midfield. From there, the CAM and the remaining two central midfielders move from across the field in unison to pressure the ball and protect the backline.

Because the Wingbacks are tasked with the duties of two separate positions they must be extremely versatile and fit. In addition to their defensive duties, Wingbacks often push as far up the field as the team's forwards in order provide width, support, and deliver crosses. The Wingback position in a 3-5-2 formation is often occupied by either a Fullback who has superior ball control and passing or an outside midfielder who can contribute on the defensive end of the field.

The two strikers in the 3-5-2 formation serve as the team’s primary goal scoring threats. They combine with each other and central midfielders, mainly the CAM, to pick apart the oppositions defense. The two strikers should also be looking to receive through balls by make runs behind the opposition’s back line.  It’s always a positive  to have at least one of these two players possess the ability to play as a target man. Meaning he has the size and strength to win crosses and long balls while holding off defenders. This allows the Wingbacks,  the three man central midfield, and the other Striker to join the attack and make themselves available to receive the ball.