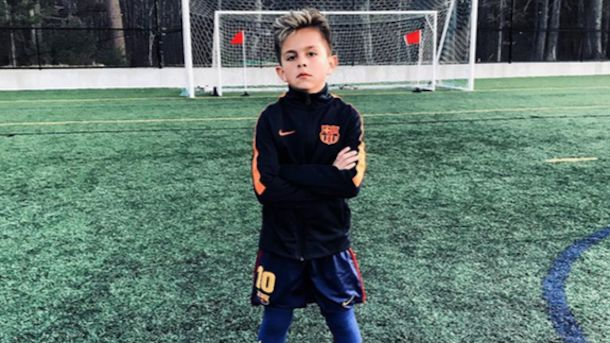 Chase Carrera is a 10-year old from Lynnfield, Massachusetts with dreams of becoming the next Lionel Messi. He was recently featured on an episode of No Days Off, a series produced by Whistle's YouTube Channel. The show features all kinds of different athletes with extraordinary talent and spirit.

Being labeled a “prodigy” at such a young age can be a lot for a 10-year old to handle, especially when you add social media to the equation. Carrera already has 33 thousand followers on Instagram and his videos on YouTube have over 100,000 views.

Carrera has taken all of this exposure in stride, the only thing he is focused on is the sport he loves.

“Chase is definitely the most consistent kid I work with.” Said Mitch McPike, Carrera’s soccer coach. “The biggest thing that separates him from other kids is his work ethic, dedication and hard work.”

Most young athletes practice 3-4 days after school is over, Carrera is up at 6 A.M. everyday during the week practicing before school starts. He then practices every day after school and competes in games/tournaments on the weekend. Putting in this much effort can have a burnout on professional athletes never mind a 10-year old kid, but Carrera isn’t worried about that there is nothing else he’d rather be doing.

On the pitch Carrera tries to model his game after three players, those three players are Lionel Messi, Paul Pogba and Paulo Dybala.

“They all shield the ball well and can create for their teammates.” Said Carerra. “Messi motivates me the most, I think he’s a great player and just love the way he plays, he’s technical on the ball, his mental game is great and I dream to someday be better than him.”

In the future Carrera dreams of playing for either Manchester United or Barcelona, he also has aspirations of making the USMNT by the time he is 20 years old.

It is hard to imagine a 10-year old with the work ethic of Carrera. One thing is for sure no matter what happens in his athletic career, if he applies himself like this he will be successful at anything he chooses to do.