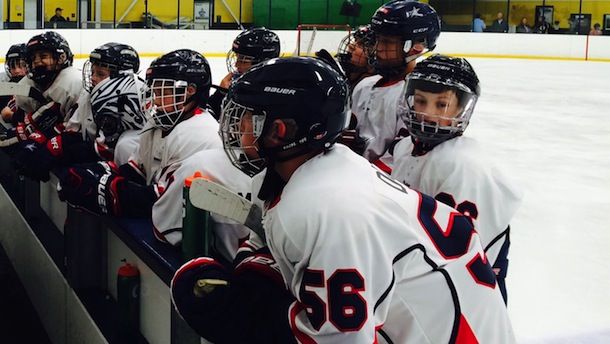 Islanders HC outscored their opponents an impressive 54-4 in their five games against the Valley Forge Minutemen (9-0), Westchester Express (19-2), Connecticut Oilers (10-0) Long Island Royals (8-1) and New Jersey Rockets (8-1). This is the second tournament IHC have gone undefeated, so make sure to keep an eye on them this season. The Boston Advantage allowed only five goals all weekend in their wins over the Connecticut Oilers (5-0), Westchester Express (9-3), Providence Capitals (Elite) (4-1), Valley Forge Minutemen (10-0), and Long Island Royals (7-1). The Mid Fairfield Jr. Rangers recorded their wins over the New Jersey Rockets (4-1), Boston Jr. Eagles (5-4), New York Saints (3-1), Long Island Royals (6-2), and Valley Forge Minutemen (9-5). Additionally, the New Jersey Rockets and Boston Jr. Eagles had good weekends as well, with the Rockets going 3-2-1 and the Jr. Eagles going 3-2.

Individually, Braden Amidon of IHC finished the weekend with 12 points from 10 goals and 2 assists, while IHC’s Shayne Gould and Max Gagnon both had 11 points. Boston Advantage’s Michael Munroe and IHC’s Matt Lacombe and Richard Gallant all recorded 10.

In squirt major, Top Gun (Elite), who finished ranked 28th last year went undefeated at 5-0. They opened with wins over the CT Oilers (6-2) and New Jersey Jr. Titans (5-2) before topping the Long Island Gulls 4-1 and the Clarence Mustangs 5-1 on the second day. To close out the event, they shut out the New Jersey Colonials AA 13-0. Also having an excellent showing were Islanders HC (finished last season ranked No. 10) and the MYHA Blue Devils, who both went 4-0 before tying each other 4-4 in the their final game.

In the 2005 age group, there were five of the 22 teams that finished undefeated, the Philadelphia Little Flyers, Patriots Hockey, Providence Capitals (Elite), and Top Gun (Elite) and three more that went 4-1, the Boston Jr. Eagles (Elite), Islanders HC (Elite), and Boston Advantage.

The Philadelphia Little Flyers, who finished last season as the No. 1 ranked team, unsurprisingly had an excellent weekend despite playing very good teams. They topped the East Coast Wizards 14-1 and the Boston Jr. Rangers 11-1, but had close games against the Boston Jr. Eagles (4-1), Islanders HC (4-2), and Minuteman Flames (3-2). Patriots Hockey had wins over the New Jersey Rockets (7-1), CT Oilers (7-3), New York Saints (5-4), PAL Jr. Islanders (5-3), and New Jersey Jr. Titans (6-1). The Providence Capitals opened up with a two-goal win over the Valley Forge Minutemen (5-3) before handily beating the New Jersey Rockets 13-3 and the New Jersey Devils 6-1. They then had a 4-2 win over the New Jersey Jr. Titans and came back from behind to beat the PAL Jr. Islanders 3-2. Top Gun recorded wins over the CT Oilers (5-2), Colorado Evolution (3-1), Westchester Vipers (4-1), New Jersey Devils (6-3) and shut out the New York Saints 5-0.

Landan Resendes of Patriots Hockey had an outstanding 12 goals and 1 assist for 13 points, Christopher Pelosi of the Little Flyers had 6 goals and 5 assists for 11 points, and Isaac Mitchell and Austin Borggaard of the Minuteman Flames both recorded 9 points from 5 goals and 4 assists.

Here, Anthony Cappello of the Westchester Vipers in action scoring 2nd goal of a total of 5 for the tournament (6a).

The Valley Forge Minutemen dominated at the Pee Wee Major level, being the only team to go 5-0. After a close, come-from-behind 2-1 win over the Carolina Jr. Hurricanes, the Minutemen shutout the Providence Capitals (Elite) and Boston Jr. Terriers (Elite) 3-0 and 5-0. They then topped the Colorado Evolution 8-1 before ending the weekend with a close game against the East Coast Wizards (Elite). Additionally, the North Jersey Avalanche went 3-0-2 and the CT Oilers went 3-1-1.

Boston Jr. Terriers’ Constantino Marrocco and Team Maryland’s Cameron O’Neill both had 8 points for the weekend, while Grace Dwyer and Ryder Wicken of the Valley Forge Minutemen both had 6.

The Boston Jr. Eagles (Elite), who finished last season ranked No 10 went undefeated at the 2003 division. Following a 5-0 shutout over the Valley Forge Minutemen, the Jr. Eagles beat the Carolina Jr. Hurricanes 3-1 and the Westchester Express 5-1. They then had a close game against the Florida Alliance, but were able to hold on for a 3-2 win before finishing their weekend. The New Hampshire Avalanche (Elite) also did well, going 4-0 after tying Team Carolina in their first game, as did the Boston Jr. Terriers, who went 4-1. Islanders HC also went undefeated against the Westchester Express, Elite Hockey AAA, and CT Oilers, but only played three games all weekend.

JP Turner of the Jr. Terriers and Ty Voit of the Florida Alliance recorded 9 points, while Boston Jr. Eagles’ Jack Hughes and Tanner Freed had 8.

Dominating the 2002 division were Islanders HC, who went 5-0 and outscored their opponents 43-8. After a tight 3-2 win against the New York Saints, Islanders HC defeated the Richmond Generals 16-1 before beating the Colorado Evolution 8-1 and Team Carolina 10-1. They then ended the showcase with a 6-3 win over the New Hampshire Jr. Monarchs. The New York Saints also had a good weekend, going 4-1 with wins over Team Carolina (2-0), the New Hampshire Jr. Monarchs (4-2), Lac St. Louis Arsenal (4-2), and Richmond Generals (5-1).

Dominic Dezort of the Pittsburgh Penguins Elite Black had 10 points from 6 goals and 4 assists, Lac St. Louis’ Devon De Vries had 9 goals, and IHC’s Jack Williams and Brendan Fennell both had 8 points.