Cayden Primeau, a goalie in the high school class of 2017, has commited to play Division I hockey at the Northeastern University, Youth1 has confirmed. 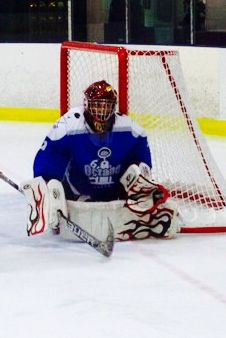 Cayden, a Voorhees, New Jersey native, plays for the Philadelphia Revolution U19 team and also plays for his school, Bishop Eustace Prep.


Primeau is a big prospect, both figuratively and literally, coming in at 6'2" and weighing 170 pounds. He won the AYHL Playoff Goalie Award in 2011 and 2012, proving he is a consistent performer between the pipes.

Although a member of the 1999 birth year, Cayden has been playing up a year for the past couple of seasons. This year, he recorded 308 saves in 15 AYHL games, giving him a 90.9% save rate for the year while playing with the Midget U16s.

In an exclusive interview with Youth1, Primeau expressed that he chose the Huskies and Northeastern because of the coaching staff, guys on the team, a strong league and course offerings that fit his interests. He also indicated that he wants to study Criminal Justice during his time on campus.

Youth1 spoke with his goalie coach, Chris Kanaly, who spoke very highly of the young goalie. "I am very proud and excited about Cayden's commitment to Northeastern. He is the best young goaltender that I have ever coached.  His instincts, composure, and athleticism are what make him the dominant goalie that he is today.  He has an undying work ethic and an off the chart compete level that make being his goalie coach a very simple job. I truly look forward to having him in Philadelphia next season and being able to work together on a daily basis. We are just getting started on this journey together and he is out to prove how good he is every day he skates into the crease. It's very inspiring to work with him and I look forward to watching him grow as an athlete and a young man."

When asked what he can bring to a Division 1 hockey program, Cayden remarked that his best qualities are his competitive nature and composure, two things that are very hard to teach. He also says that he needs to improve on his technical game and quickness, things that he has plenty of time to work on before he steps on campus.

Cayden credits his family with getting him interested and involved in the sport of hockey. He began playing the game at the age of six, and was playing goalie by the time he was seven.

His father is former NHL player Keith Primeau, who played 15 years in the league. Keith was the named the 2013 Coach of the Year for Team Comcast, a team which featured Cayden. That season, Cayden finished with a 94% save rate, anchoring his team as they fell just short of a trip to Nationals.

Congratulations to Cayden and the entire Primeau family on a tremendous accomplishment. Stay tuned to Youth1.com for more D1 commitments and exclusive coverage of the 2014 USA Hockey Nationals.

For our complete list of players that have verbally committed to play Division I hockey, check out our  D1 Report