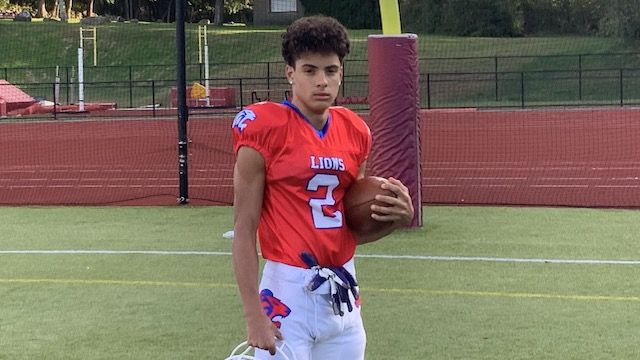 One of the rising youth talents in the nation from the 2027 class is Christian Rust, who is making a splash with his playmaking ability from the Wide Receiver position.

Rust is one of the leading prospects that will be named to our yet-to-be released Next Up Watchlist.

The South Kingstown, RI native is a budding pass-catching talent that has a chance to be 2027's premier WR, as his game continues to progress. Rust will catch everything thrown his direction and really excels as a route runner. He's a safety blanket for his QB because of how reliable he is to make a play. 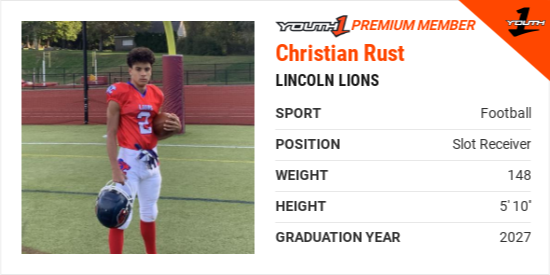 Standing at 5'11" 146 lbs., Rust has great size for a youth WR, and he knows how to use this to his advantage. He's a mismatch for most DBs he's matched up against, and will snatch the ball out the air to make a big play for his team.

Rust really enjoys the nuances of matching up against opposing Defensive Backs.

"I have to determine based on the DBs positioning and body language what he’s guessing I am going to do, and what he’s trying to take away. Whether he’s in press coverage or loose. He and I know that he can’t take away everything, so how can I get him. Yeah, I like the chess match," he added.

Rust most recently starred for both the Lincoln Lions and Providence Seahawks. He is quick to mention being a part of a collective is his favorite aspect of playing football.

"Being a part of a team and leading them. 11 guys on offense and 11 teammates on defense all trying to do and accomplish the same thing working together to execute plays and beat the other team. I love that feeling that we are in this together to win games and championships," he said.

With his standout play on the football field, Christian is building a reputation as a WR to lookout for. Our friends at WRHitList have currently ranked Christian as the #2 WR in the 2027 class. Additionally, Rust was named the 2021 Offensive MVP for the National Middle School Showcase, selected to attend Under Armour All-America Middle School Camp, FBU’s Top Gun Showcase, and was selected to attend NextGen's The Show.

The recognition for his talent is appreciated, but Rust remains steadfast in earning his spot as the #1 WR in the 2027 class. He's working hard to get better and better.

"I know I am getting better each year. Playing the regular season, spring ball and attending camps is making me a better football player. I am committed to my craft in wanting to be the most complete WR I can be and the best WR in the 2027 class," Rust said.

"I pride myself on wanting to be the most “complete” wide receiver in the game. That means of course making every catch that hits my hands and running the best and most crisp routes I can," he added.

When asked about an area of his game he's focused on improving, Rust was quick to note that he takes extreme pride in his ability to block from the WR position.

"I pride myself on being the complete wide receiver and blocking is super important to me. I get as pumped up from blocking DBs and knocking them on their butts as I do scoring touchdowns," Rust said.

"I have a highlight reel purely dedicated to my blocking highlights. My blocking strength and favorite blocking technique is “Punch” blocking," he added.

It comes as no surprise that Rust models his game after one of the NFL's longtime big play WR in Julio Jones.

"I study Julio and admire his game because he does all the big things right but as important he does all the little things right as well. His routes are great, his hands are tough, he’s super strong and blocks well and he’s so smart. He’s a complete wide receiver for sure," Rust said.

This is only the beginning for 2027 WR Christian Rust. With his talent level and dedication to his craft, it's no shock that he's already being recognized as a rising Receiver talent from the 2027 class. Being named to Youth1's Next Up Watchlist is the latest accomplishment for a young athlete just getting started in what he's destined to accomplish.

Rust remains focused and dedicated to being that #1 WR, and most importantly, a "complete" WR.

"My goal is to be the #1 wide receiver in my class and I will work even harder in 2022 to achieve my goal," Rust said.

Lee Slagel
Football | Inside Linebacker
Get your profile