Top Performers from The Show 2018 presented by HeroFuel

Top Performers from The Show 2018 presented by HeroFuel 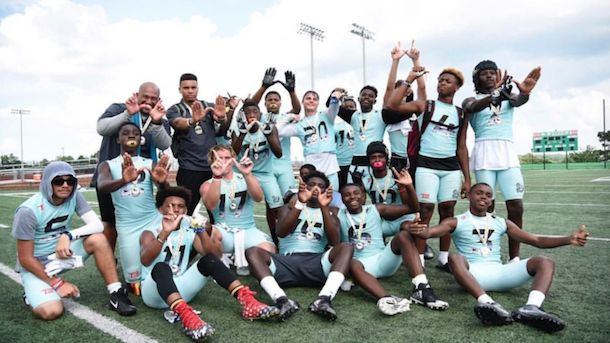 The nation's most talented young athletes showed up in Atlanta, GA for NextGen’s The Show 2018 this past weekend. 32 States and Canada were represented at The Show.

The Show is one of the nation’s biggest youth football events. It serves as a great showcase for some of the country’s top talents. This year’s event did not disappoint.

Presented by HeroFuel, here are Youth1’s Top Performers from The Show 2018.

Shelton was the most impressive QB from the 2023 class at The Show. He made beautiful throws with regularity. He throws the ball with great accuracy and zip. He led Team Future to a championship and was named MVP.

Atkins has all the ability from the QB position. He goes through reads quickly, has great feet in the pocket, and delivers a truly beautiful ball. His performance at The Show was stellar.

Ard led Team Blaze throwing some great passes throughout the weekend. He threw some impressive dimes with accuracy and strength.

Scoggins has a ton of talent throwing the ball. His passes look beautiful in the air. He throws the ball with real precision.

Mascoe stole the Show in the Platinum division. He made play after play to lead Team Tempo to a championship victory. He was also named MVP. No surprise here, as Mascoe is one of 2022's most highly ranked prospects.

Geriner has great size for a QB. He made tough throws look easy and was standout pocket passer throughout the weekend. He shined for Team Mamba, leading them to the championship game.

Del Rio was another stud QB for Team Mamba. He threw some impressive dimes and showed superb touch on his deep balls.

Morehead really impressed with pinpoint throws both game days. He just made something out of nothing more often than not. He throws a beautiful ball with a tight spiral. He threw a bunch of eye-popping TDs.

Miles shined bright at The Show. He can make all the throws and did so all weekend long while making it look easy. Deep balls are a specialty of his and he threw numerous at The Show.

Smiley put on a nice performance as he made his share of plays for Team Shock.

Johnson played a big role in Team Tempo's championship run. He made big plays when his team needed it most. This young man is fast and supremely talented.

King is well known for producing at NextGen events. He continued that trend with an impressive performance at The Show.

Boyd is a young receiver with a ton of talent. He runs smooth routes, catches the ball with his hands then brings it into his body, and he seems to always find an open spot in the coverage. He had a good connection with 2023 QB Cody Shelton throughout The Show, helping guide Team Shock to a championship.

The always steady Raid Zerki was a standout as usual.

Martin mades plays on both sides of the ball for Team Mamba. He's one of the best athletes in his class and continued to prove that at The Show.

Wesley is a stud young receiver. He's everything young could ask for in a receiver. He had an outstanding performance at The Show .

Rucker is a top notch WR talent that was a difference-maker all weekend long for Team Crush. Great hands, excellent route running, and the ability to make the tough catches sets Rucker apart.

Red did it all on both sides of the ball for Team Mamba. He made plays at LB, DB, and WR throughout the biggest games of the weekend. Red is a confident young athlete who has the game and swagger to back it up.

Wright made impressive grabs all weekend long. He snagged a few touchdowns as well.

Winfield is one of the best Receivers from the 2022 class and his talent was on display at The Show.

Smiley was a go to WR for 2022 QB Chad Mascoe on Team Tempo. He just made plays when the team really needed it. He caught every ball thrown his way and used his speed to breakaway from the defense.

Sledge was a go to receiver for the Team Blaze QBs. He made a ton of impressive plays that resulted in an overall great showing for the VA native.

Johansen was a go to target for QB Chad Mascoe on Team Tempo. He had a bunch of touchdowns to help get the championship for his squad.

Morrissette is one of 2022's best receiver talents, if not the best. He made big plays at The Show. He runs great routes, has strong hands, and catches the ball at it's highest point.

Peart was one of the more impressive receivers from the younger age group. A rising young talent to keep an eye on going forward.

Jordan is among the best prospects the 2023 class has to offer. He was steady at LB for Team Future during The Show.

Velasquez is a grinder that outworks and out smarts his opponent. That was on display at The Show.

Cervantes' buzz has really grown over the past year and deservingly so. He was a standout at The Show for Team Impact.

Combest is another 2022 athlete that had a great showing at The Show. He's always in the right spot at the right time and ready to make a play for his team.

Moss doesn't make mistakes, which makes him an asset to any team. He was strong presence for Team Ice all weekend.

Sorey played his tail off for Team Blaze. He caught the eye of Youth1 with some big plays at The Show.

Adams is a rising young talent in the 2023 class. Very competitive young man. His performance at The Show was impressive, as he really lifted the defense all weekend. Keep an eye on him going forward.

Bowen was a bright spot for his Team Vapor throughout the weekend.

Howell is talented DB that really helped make Team Tempo tough to score on at times. His talent was apparent every game. Very nice kid off the field, but very competitive when the lights are on.

Joseph is a playmaker on both sides of the ball. He made plays all weekend long for Team Blaze.

Davis is a lockdown corner with loads of talent. His ability to shutdown one side of the field, aided Team Mamba through the battle games. He had some big time INTs.

Ward has a growing reputation as a one of the top Linemen in the 2023 class. He was impressive at The Show 2018.

Evans is a physical lineman with loads of talent. Great technique, solid footwork, and just knows how to make an impact. He shined bright at The Show.

Keele was another standout lineman at The Show. Has great technique, good strength and gives his all in every drill.

Payne is one of 2021's top lineman prospects. His performance at The Show backed up his growing reputation.

Hutson is a beast of a young lineman. He continues to prove he is a force to be reckoned with.

Scroggs is a rising talent on the line. He works hard for everything. His strength and technique are among his best attributes.

His ability to make plays on the line is what has helped build Hatcher's reputation as a standout from the 2022 class. At The Show, he was able to showcase his strength and overall impressive skillset.