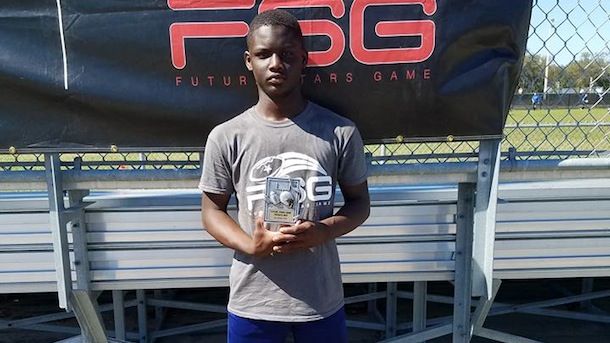 On the gridiron Stacy Gage lets the beast out. In February, the fierce hard hitting linebacker and scoring machine was named MVP of the Future Stars Camp in Tampa.

Gage lives in Riverview, Fla., is 12-years-old, 5’9, 150 pounds, is in the sixth grade at South Shore Charter Academy and plays running back, wide receiver, linebacker and defensive end for the Riverview Raiders.

“I missed the it (MVP) the previous year because I was a fifth grader,” he said. “My goal was to bring it home this year and it happened!”

Gage began playing football around age 6 or 7 and fortunately had the guidance of his older brother Stazion Gage,14, and his uncle Tony Watkins, is the president of the Riverview Raiders Little League and halfback coach at Riverview High School.

Watkins has had a major impact on Gage’s life. In 2009, Gage’s mother, Latavia Maria Frazier passed away and four years later he adopted Gage and his siblings.

“He has been more than a father to me and my siblings,” Gage said. “I listen to him because he gives it to me straight. He says I have a great upside when talking about football as long as I remain humble.”

He noted that he and Stazion are close on and off the field. They a share a love for the gridiron and he always looks to him for advice.

Gage joked that his brother thinks he can do everything better than him because he is older, so he always tries to prove him wrong. From making their bed first to running the 40-yard dash, the two are always competing

“I work hard to follow his lead, both in the classroom and on the football field,” he said. “Stazion has taught me how to be a leader on the field. I love watching my brother play football.” 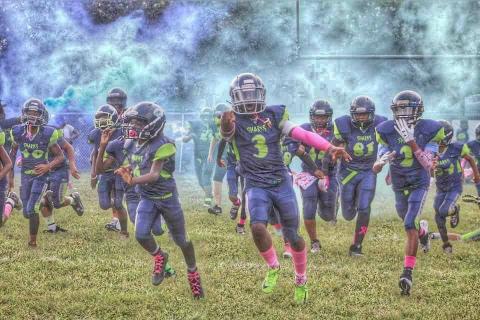 Gage started off as a lineman, but after a couple of years, became a running back. He is a lot bigger than most kids his age and often plays with teens that are older than him. However, that does not intimidate him, his uncle said.

Gage is just regular teen with a good heart, Watkins said. Recently, he displayed compassion for others when he was named homecoming king and gave the crown to one of his teammates who is autistic.

“Words can’t explain how this gesture of kindness affected me,” Watkins said. “When I asked him why he did it he stated he would enjoy it more than me uncle Tony.”

But, his generosity towards others off the field is matched by is intensity on it. He attends camps, watches film and in the past three years has scored more than 80 touchdowns. 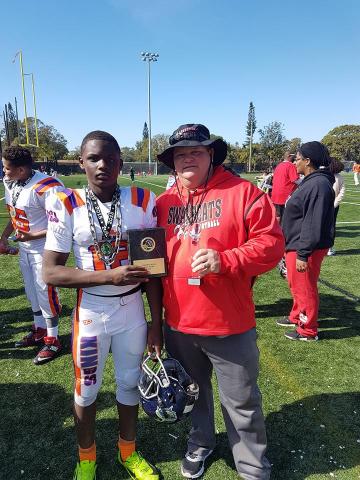 “He’s mentally growing while he’s growing as an athlete,” Watkins noted. “He gets stronger every year.”

Gage, who has been on the high honor roll in school, the MVP of the Gridiron Kings and a 3 time All Star MFFCC conference, prides himself on exceling in and out of the classroom. He looks up to NFL players Marshawn Lynch and Ezekiel Elliott, and hopes to one-day play professionally like them.

“I understand that I'm a good player, but to be a great player I must remain humble and continue to train and listen to my coaches,” Gage remarked. “I believe I was born to play this sport.

I feel at home on the football field. I thank God for blessing me with this ability.” 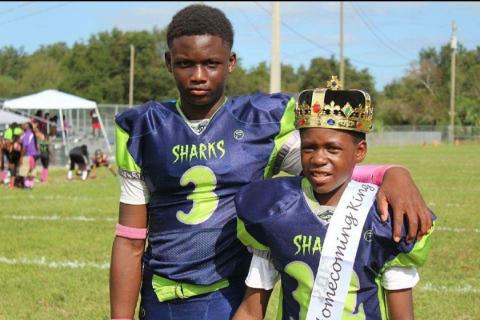 Jason Cohen 3 years ago
next page?

Adam Foley
Football | Defensive Back, Wide Receiver
Get your profile