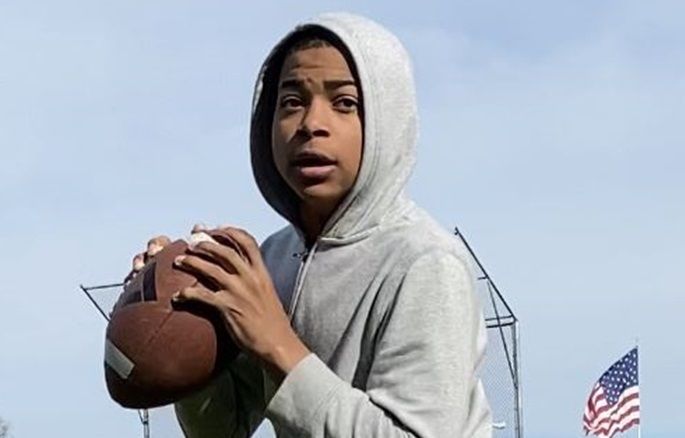 In the game of football, some players end up at certain positions out of pure necessity. That’s how Saeed Williams Jr., a 2026 football recruit from the state of Virginia, ended up playing the quarterback position. Williams started playing football when he was 7-year-old and didn’t switch positions until a couple of years ago. He was the only player who had a strong enough arm to actually complete passes to wide receivers downfield. It didn’t take too long to get used to his new position. “I like being a leader and controlling the offense,” Williams said when asked what he liked about playing quarterback.

Williams says he gets inspiration from two current NFL quarterbacks: Lamar Jackson and Aaron Rogers. His goal is to play in the NFL one day. However, he knows that he’ll have to put in a lot of work in order to make that dream come true. Williams’ favorite college football team is LSU.

Williams worked on a few things during the offseason that has helped him excel as a player this season. “Before, I had a problem with throwing the long ball,” said Williams. “So, in the offseason, I stuck to lifting weights and working on my accuracy. That was really it.”

Williams says he gets inspiration from two current NFL quarterbacks: Lamar Jackson and Aaron Rogers. His goal is to play in the NFL one day. However, he knows that he’ll have to put in a lot of work in order to make that dream come true. Williams’ favorite college football team is LSU.

“Well, when I first got here, I was pretty nervous,” said Williams. “There were three other quarterbacks. Some of the players on the team were former teammates that I’ve played with before. Then, in the first scrimmage, we got to play against each other. I actually was pretty solid. So, ever since then, I’ve gotten my jitters out.” His father, Saeed Williams Sr., feels that the FBU experience will benefit his son as a football player. “I think it’s good and it’ll be great exposure,” Williams Sr. said when asked how he thinks playing for FBU will help his son as a football player. “In the past year he’s won the top quarterback MVP at the Under Armour Next Camp (Baltimore). That earned him an invite to the Under Armour Futures All-American Game that’ll be played in Orlando this upcoming January.”

As I mentioned in the article, Williams played this past weekend for FBU Richmond in the FBU Youth Football National Tournament. His team went 1-1 and Williams accounted for four passing touchdowns and three rushing touchdowns. I Had a chance to watch a few of his highlights from the game and “exciting” is the best way to describe Williams as a player. I thought he showed good accuracy on his midrange passes. Williams can continue to work on his arm strength. With that being said, his decision-making, speed, and quickness as a runner makes him a great playmaker at the quarterback position.