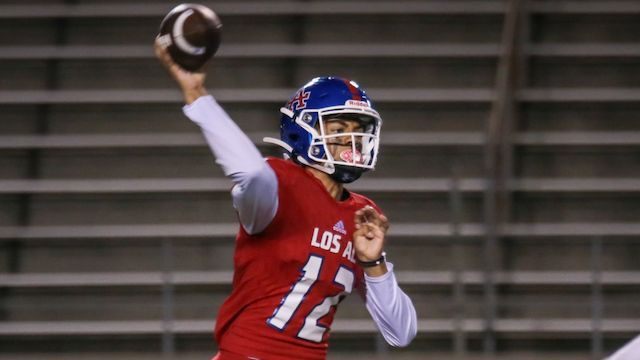 It’s not every day that a young athlete goes from playing quarterback in 14U Pop Warner football to starting for his high school varsity team, but Malachi Nelson from Alamitos, Calif., shows that he has the remarkable physical gifts to do so—and thrive.

The highly touted, 2023 QB is part of Youth1's Freshman450, and the talented phenom has already led the varsity team at Los Alamitos High School to its first victory (27-0), then helping the team win by scores of 42-7 and 44-3. All of this comes after he led the 14U Garden Grove Bulldogs to the National Pop Warner Super Bowl in Florida.

Nelson’s formidable talent got him noticed well before he began playing for the Los Alamitos Griffins. In fact, when he graduated from middle school last year, he received an offer from Auburn, since he was already showing a big-time arm and playmaking skills. At the time of this interview, he had just received offers from Oregon and Georgia, as well. And on October 22, he posted on his Twitter page that he had received an offer from LSU.

The 6’3”, 175-lb. pro-style quarterback has the size and arm strength to easily scan the field and deliver long and short strikes at will. When the pocket collapses, he doesn’t panic, but rather uses his speed (a 4.85 40) to buy time before making a throw or taking off for yardage. Along with his physical gifts, Nelson is able to process and read defenses quickly. His highlights show that Nelson is already looking like a seasoned senior, making play after play.

It’s been quite a shift going from a 14U Pop Warner team to a high school varsity starter, but Nelson is making the transition well thanks to his talent, dedication and hard work.

“This year has been a big jump, playing varsity as a freshman,” he said. “It’s been an adjustment getting used to the speed of the game, but it’s fun.”

While most freshmen would have trouble bearing the weight leading the JV team, much less the varsity squad, Nelson welcomes being the starting QB for Los Alamitos High.

When asked how it felt to be a part of the Freshman450, Nelson replied, “It’s a great feeling that my hard work is being noticed and paying off. But it’s also motivation to get better and be the best. [It shows] that the hours and sacrifice people don’t see are working.”

Nelson models himself after two top-tier NFL quarterback: Tom Brady (“because of his mental approach to the game”) and Aaron Rodgers (“because of his playmaking”), so it’s fitting that he wears No. 12, as well, since all three are game changers.

By the time you’re reading this, Nelson is sure to have even more highlight videos online. Keep an eye on his Twitter page @MalachiNelson9 to see how far this talented young QB can go.

View some of Nelson's highlights below.