One thing we've proven at Youth1 over the years, is that elite talent can be identified at the youth level. There are countless young athletes across the country with dedication, work-ethic, and tantalizing talent ready to be spotlighted.

One of the nation's premier rising young stars is 6th grade phenom, Julian Lewis, who is building a reputation as the next great QB prospect.

Some of his accolades throughout his young football career include:

Georgia B2C QB of the Year 9u

Georgia B2C Player of the Year 10u

Lewis loves the game of football. It's the competition that really gets him going.

Standing at 5'7" 128 lbs., Lewis shines bright on every field he steps foot on. He has a true presence on the field that's noticeable on his film. His highlight tape is one of the more impressive tapes you'll see from someone his age. His footwork, throwing mechanics, and poise in the pocket are stellar.

Lewis can make all the throws. His ability to drop in accurate deep balls is remarkable. He excels at throwing the ball while on the move. Give him time in the pocket, and he'll pick the defense a part. If he feels pressure he'll use his athleticism to evade the defenders, then deliver an on target ball to his receiver.

"My ability to make throws on and off platform and my ability to get the ball out quickly, are a big part of my game," Lewis said of his strengths.

"The thing that probably is my biggest strength is that things don’t bother me. I’m not a player that goes crazy celebrating after a score and I don’t get down if there is a mistake. I play until the last whistle and always believe that I can help my team win," he added.

The Marietta, GA native most recently played for the Welcome All Panthers 10 and 11u team, as well as the GFL FBU 6th Grade team. Lewis currently attends Pace Academy in Georgia.

"Since I started playing QB I have been blessed to play with awesome teammates. I don’t know my career record, but I‘ve only lost 3 games in 5 seasons at QB and have never lost to a team from outside of Georgia," Lewis said of his success playing football.

"I’ve been a part of League, State, Battle National and FBU National Championship teams," he added.

Lewis is a hard working young man dedicated to the game. He's pleased with his progress, but is hungry to get better from here.

"I am happy with how things have gone so far for me in football, but I am nowhere near where I want to be if that makes sense. Every year I just want to get better and continue to improve on the little things that will help me reach my goals," Lewis said.

As he strives to take his game to the next level, Lewis has few areas he'd like to improve.

"The areas that I am focused on most, is my decision making and leadership. I know that as I get older I will be allowed to do more and I want to be ready when the time comes," Lewis said.

"For the next level the most important thing for me will be film study. Really learning how to watch film and prepare for games. In youth football we won because we worked and trained harder than everyone else on the field. At the next level it will be the same is what they tell me, just now it will be in the classroom," he added.

It comes as no surprise that Lewis models his game after one of the NFL's elite all-time passers.

"Aaron Rogers, because of how he uses different drops to execute plays and how you can tell he always knows where the pressure is going to come from," Lewis said.

2026 QB Julian Lewis is making waves for his stellar ability on the football field. His play is levels beyond what you'd expect from a 6th grader, with his big time ability from the QB spot.

It will be exciting to follow his football journey from here. 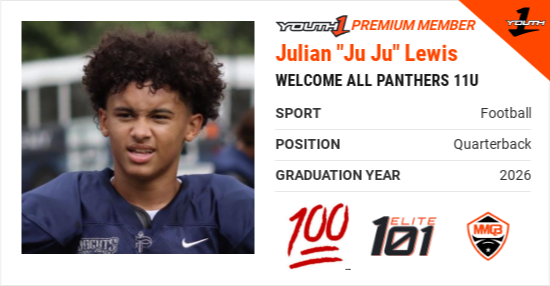