Louie Amiano is one of the best players from the Tabernacle, NJ area in the Class of 2025.

The 5-foot-8, 145-pound Amiano, who attends Olson Middle School, is a dynamic player that works as a running back, wide receiver, middle linebacker and defensive end for the Next Level Greats. 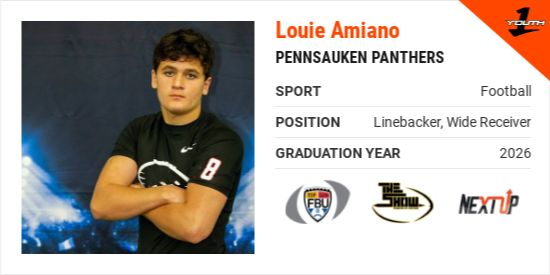 Amiano has earned plenty of recognition during his career. Here’s a list of some of his individual and team accomplishments:

·     2018: Undefeated Champions of the SJIFA (earned another invite to Hall of Fame)

Amiano is humbled by the accolades.

No matter the opponent, every game Amiano is determined to give it his all.

Amiano is going all out.

The motor is always at full throttle whenever Amiano steps between the lines.

“My mindset is to fly to the ball and hit people,” Amiano said.

Amiano has great passion and energy whenever he’s on the field. Amiano tells why he enjoys the game of football so much.

“I love the aggression of the sport,” Amiano said. “I like physical sports that test your body’s limits.”

Amiano has learned many valuable lessons from playing football that he applies to his everyday life.

“I’ve learned that you’re not always going to win but you have to win more than you lose,” Amiano said.

“Last year with the Pennsauken Panthers. It was my first year with them and it was an older team. I made the varsity team and got to play with some of the best players in New Jersey. I made good friends that year. We dominated as a team,” Amiano said. “We all got to go to the Pro Football Hall of Fame together. As the youngest varsity player on the team I went up against some of the best players in New Jersey. I was our starting linebacker. I loved all the tackles I made against players who were as good as if not better than any I had ever played.”

Brandon Bather has coached Amiano for three years with Next Level Greats.

“He is a fearless runner of the ball whenever he gets his hands on it. Big play potential with every rep. Takes pride in running past people but also is not one to shy away from contact and deliver a punishing blow to gain more yards,” Bather said. “Defensively he can play all over the field as a linebacker and sometimes as a rush end. Moves with a different speed on defense, closes ground on running backs with ease and also is a great all-around tackler of the football. Great with angles and pursuit of backs and is elusive and strong enough to defeat blocks.  I like his overall knowledge of the game. Very immersed and in love with the game of football at an early age. Everything that he talks about is about football.”

Amiano discusses what separates him from other players.

“I believe it is my work and my aggression. I have been training since I was 6 years old on my footwork,” Amiano said. “My mom says I have been aggressive as long as I could walk, not in a bad way but I did not enjoy sports where I was not physical. I like to be aggressive on the field. It’s like I change when I walk into a game.”

Amiano takes his role as one of the leaders on the team very seriously. Amiano makes sure he’s a daily positive influence on his peers.

“I try to lead them by example. I do all my drills the right way and listen to my coaches. I try to pick them up when they are down. I have my teammates to my house. I live in a rural area and my teammates live in the inner-city. They get a kick out of where I live,” Amiano said. “The best advice I give is to work hard at your position and work hard for your team.”

Bather adds that Amiano is one of those consummate teammates that every squad needs to be successful.

“His leadership qualities are always being worked on every year, but he leads by example during games,” Bather said. “Always playing hard and giving maximum effort. Has a winning mentality and demands greatness out of everything he does. He always wants to be the best at everything.”

Amiano is appreciative of having amazing male role models that are supportive.

“I’ve learned to be a team player. My coaches say we are all family no matter what color or background we are. I believe that. My coaches always talk about good grades. My coaches support my parents as well as me,” Amiano said. “My mom can always call Coach Brandon if I am getting off track and he will come and set me straight. It makes me mad at first but I learn from it. They tell me to keep working hard and the rest will follow.’

“I’ve seen Lou make crazy plays for his age,” Bather said. “One-handed catches, strip sacks, interceptions for touchdowns, wide receiver screens he takes to the crib for 60. He has done it all at an early age, so plays usually come natural to him.”

Amiano has excellent awareness that puts him in position to thrive.

“He is very intelligent for his age when it comes to knowing the game. He has understand scenarios and certain parts of the game that a lot of kids his age do not understand which makes it easier for him to make plays,” Bather said. “He constantly is watching football and asking me questions everytime about certain scenarios in NFL games and how he would have played them if he were playing. Just those conversations give him an advantage.”

Amiano is on the grind to perfect and hone his craft in any way possible. Bather loves Amiano’s drive and determination.

“He is one of the hardest working kids I’ve ever seen at his age. He trains for football year round,” Bather said. “He just started running track and I know he will excel in that as well. He trains like he is competing in a game. He pushes himself to the limit and you can definitely see the carry over on the field.”

Amiano is constantly striving for excellence.

“I do pushups and sit ups every day,” Amiano said. “I train with a group or a trainer 4-5 days a week. I want to be on varsity as a freshman. I want to get a 3.5 GPA. I want to get D-I offers as soon as I can so I can start planning my future after high school.”

“He definitely has the athleticism to play DB but he strikes you like a linebacker,” Bather said. “Not scared of anyone and intelligent on the field.”

Amiano patterns his mentality after this legendary linebacker.

“I look up to Ray Lewis,” Amiano said. “I like the energy he brings to the game. I like how he looks at life and how he helps others be better.”

Amiano lists reading as his favorite subject in school.

“I like to read about athletes and history,” Amiano said.

Bather lists the improvements that can take Amiano’s game to the next level.

“Right now I am working on his mental focus, being a young boy he tends to be scatterbrained and lose focus sometimes. Which is common for kids his age. I see progress over the years in his ability to stay focused and serious about his task for the day, but he is a fun kid who loves people and making friends and having a good time. It’s my job to show him that there is a time to play and a time to be serious,” Bather said. “So I make sure I remind him constantly to train his mind to focus on his tasks of the day and accomplish them before he gets distracted and interested in other things. He is on track to be a pretty phenomenal kid. His mental development is going to continue to get better as he matured into a young man and it’s going to be great to see.”

Bather believes the sky is the limit as long as Amiano continues to stay hungry.

“He has the potential to be a very successful citizen in the world. Football will be a highlight in his life and he will excel in the sport hopefully to the highest level, but his best works in his life will come after he has finished playing the game. He is someone who will use football to teach him the game of life and make connections with many people that kids like him do not get to be around. Football brings all races together for one common goal, and the experiences that his parents are giving him are setting him up for a life of success,” Bather said. “He trains in Camden, NJ with the top athletes in the country, such as NJ 2019 Gatorade Player of the Year Fadil Diggs, Under Armour All American Stanley King. So his potential is unlimited, he has a great support team and his parents really make sure he is supported in every way possible.”