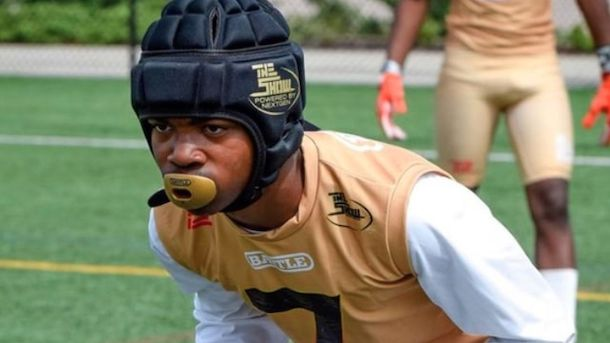 Of the impressive athletes from the New Jersey area, 2023 DB Ryan Adams continues to prove why he's among the elite. At every turn, Adams has stepped up to the plate and showed off his impressive skillset.

At the recent NextGen Northeast Showcase, Adams was named as an Overall MVP for his impressive performance at the event.

"Being named MVP was a shock and great feeling at the same time. It was just a small example of the all the hard work I’ve been putting in is started to pay off," Adams told Youth1.com.

"I think that being selected from all the talented player that were there and winning MVP was a testament to how much dedication and hard work I’ve been doing since I’ve started playing football. Also to all my coaches and trainers that really believe in me and push me toward working to my fullest abilities at all times," he added.

Adams also secured the bag, as he received a golden ticket invitation to NextGen's invite-only main event, The Show. This will be Adams second time competing at The Show, as he competed in last year's The Show in Atlanta, GA.

2019's The Show is set to be at IMG Academy in Florida this June.

The New Jersey native is excited to play at the prestigious IMG Academy and compete against the nation's best youth talent.

"Getting invited to The Show for the second time is a blessing. It was a great experience last year in Atlanta, Georgia. I was selected in the Honorable Mention Award last year. My team Future won our entire division," Adams said.

"This year I’m excited it will be held in Florida at IMG campus. I’ve heard so much about the place and being able to go perform there is going to be a great experience," he added.

Standing at 5'7" 145 lbs., Adams is tough player that excels at all facets of the Defensive Back position. He's a ballhawk in coverage, reads opposing offenses with precision, and makes the correct play on the ball almost always. He's physical in defending the run and isn't afraid to deliver big hits when necessary.

"I play Cornerback/Safety, Wide Receiver and Slot as well as Punt Return and Kickoff Return. I enjoy all these positions because I can use my talent  and skills to help my team in different ways. I can use my skills as Wide Receiver knowing different defenses sets to better understand my positioning on the field finding opening spots," Adams said.

"Cornerback is by far my favorite position because I can disrupt the offense’s timing and cause a half of the field to be impossible play on. I enjoy being able to control one side of the field as a Cornerback. I take pride in focusing on doing my job and using all the techniques my coaches and trainers have taught me to help my team. I feel like help change the outcome of the game for my team." he added.

Perhaps most impressive, is that Adams is a thinker of the game and a real student. He uses his mind to his advantage, as he knows the mental is just as important as the physical. Adams is the true definition of a team player.

"My favorite part of playing football is the competition, teamwork, mental aspects, and physical contact. I think that not many other sports have the same core principles as football. The entire team has to work together to even begin to take action on the field," Adams said.

"I really enjoy the strategy and the thinking involved which to me is key. You also have to rely on someone else to do their job successfully for the team to be successful," he added.

His performance at the Northeast Showcase has become the norm for Ryan Adams, as he's built a reputation as an elite athlete from the 2023 class. He was named to Youth1's Elite101 ranking in the fall of 2018.

"Some of my strengths on the football field are my coverage skills, my toughness and ability to out think the guy I am covering during  the games I play. I like to mess up the timing between receivers and the quarterback," Adams said.

"I like helping my team feel confidence that we can win. I think my strength is that I vocal on the field and being able to talk to my teammates," he added.

Adams vows to keep on improving from here.

"I’m working hard everyday to become stronger, faster, quicker, and more knowledgeable about the game. I like the feedback that I get from my coaches to help me get better. I enjoy practice because I get to work on the stuff I need to improve on," Adams said.

"I’m working to improve my techniques, my knowledge of the game and getting stronger and faster," he added.

2023 DB Ryan Adams is a great young football talent. Receiving the MVP award at NextGen's Northeast Showcase and an invite to The Show is a testament to the type of player Adams has developed into.

He'll be a player to keep a big eye on at The Show this June.

"I’m thankful overall for getting another chance to showcase my skills against the best players in the country that were also selected," Adams said.

For more on Ryan Adams, check out his Youth1 Player Profile -> here.