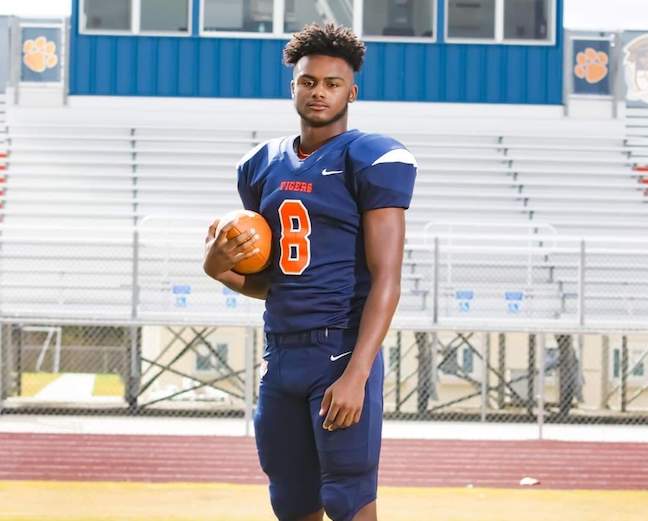 DeMario Tolan is one of the best players from the Orlando, FL area in the Class of 2022.

The 6-foot-3, 205-pound Tolan, who attends Tohopekaliga High School, is a dynamic player that works as an outside linebacker, strong safety, and wide receiver. 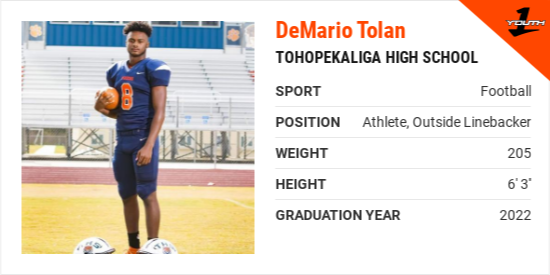 Tolan has earned plenty of recognition during his career, such as being selected First-team All-Orange Belt Conference as a sophomore.

Tolan is humbled by the accolade.

“It shows that hard work pays off but I still have more work to do,” Tolan said.

No matter the opponent, every game Tolan is determined to give it his all.

Tolan is going all out.

The motor is always at full throttle whenever Tolan steps between the lines.

“At linebacker my mindset is to kill everything moving on the other side of the ball. At wide receiver I feel no one can guard me,” Tolan said. “I don't believe in talking but letting my play do all the talking.”

Tolan has great passion and energy whenever he’s on the field. Tolan tells why he enjoys the game of football so much.

“My favorite thing about playing is that nothing else matters but the task at hand,” Tolan said.

“One of my favorite memories is when I got a big hit against Melbourne because it got the whole team fired up,” Tolan said.

Tolan takes his role as one of the leaders on the team very seriously. Tolan makes sure he’s a daily positive influence on his peers.

“I demonstrate leadership by being a good teammate,” Tolan said. “The best advice I give is no excuses and work hard at everything. School first then football and to respect yourself at all times. Do what's right when no one is looking.”

Tolan is appreciative of having amazing male role models that are supportive.

“I’ve learned from my coaches that anything in life you really want takes hard work and dedication,” Tolan said.

Tolan patterns his play after this defensive back.

“I look up to Kam Chancellor because I like the way he plays the game,” Tolan said.

Tolan lists math as his favorite subject in school.

“It’s my best subject and easy to understand,” Tolan said.

“My dream college is Alabama because this school is the only team that inspires me to play hard because of how they play,” Tolan said.

Tolan is striving for greatness in all that he does.

“On the field I want to be the best and play pro football,” Tolan said. “Off the field, I want to study in business and get my degree and be in the business industry.”