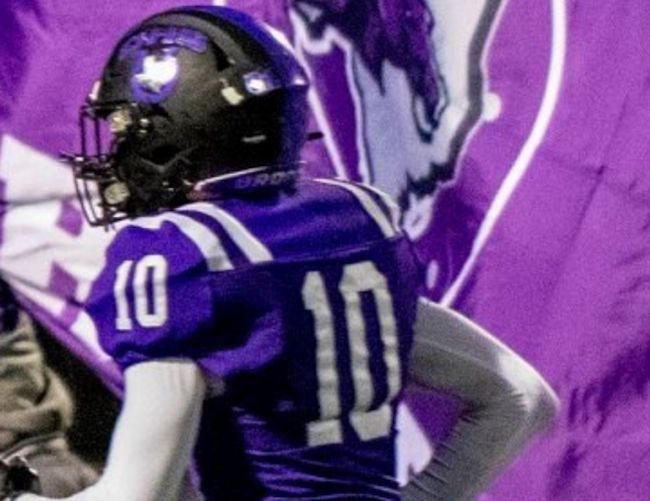 Cam’Ron Willis is one of the best players from the Dayton, TX area in the Class of 2022.

The 6-foot-1, 180-pound Willis, who attends Dayton High School, is a dynamic player that works as an outside Linebacker/ATH. 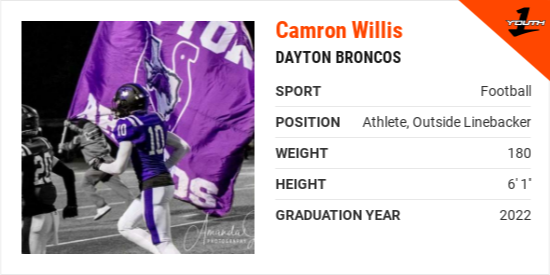 No matter the opponent, every game Willis is determined to give it his all.

Willis is going all out.

The motor is always at full throttle whenever Willis steps between the lines.

“I feel that my position is one of the harder positions to play on the defensive side of the football,” Willis said. “It takes a lot of discipline to know when to attack and how fast to attack the ball because of how you are usually the read key and how most offensive coordinators base their schemes against defenses.”

Willis has great passion and energy whenever he’s on the field. Willis tells why he enjoys the game of football so much.

“I genuinely love the intensity and physicality of this sport,” Willis said.

Willis has learned many valuable lessons from playing football that he applies to his everyday life.

“Many may say that football or any other athletic participation reveals character but being older and being able to understand the game better it has shown me that sports reveal character,” Willis said.

“One of my favorite football season’s was freshmen year because I was beginning to understand the game on a whole other level, and I saw my growth from the first game of the season all the way to my last,” Willis said.

“Cam'Ron is an extremely intelligent young man and he uses that on the field.  He has an understanding of how offenses will attack and is learning how to be in the right spot to take advantage of those opportunities,” Nations said. “I like his tenacity and his work ethic to get better each day and each rep.”

Willis takes his role as one of the leaders on the team very seriously. Willis makes sure he’s a daily positive influence on his peers.

“A good teammate always is first and foremost supportive to all of his teammates and lets them know when they have made mistakes and when they have done well,” Willis said. “The most supportive advice I have given my teammates is to play every game and practice every rep with relentless effort and pursuit because it could always be your last.”

Nations adds that Willis is one of those consummate teammates that every squad needs to be successful.

“He makes sure that he is the hardest worker on the field or in the weight room,” Nations said. “He leads by example and is starting to gain his voice as a leader as well.”

Willis is appreciative of having amazing male role models that are supportive.

“I’ve learned that being a leader doesn’t always mean you possess the best skill set on your team,” Willis said. “I have learned  from  my coaches that just because   you’re on the team, everybody might not have the same mindset as you. You can’t let that disturb your process of trying to succeed.”

Nations is an advocate of Willis’ capabilities.

“Cam has made several big third down plays for us,” Nations said.

In addition to making clutch plays, Willis is developing a high level of football IQ as well.

Willis is growing into excellent football awareness that puts him in position to thrive.

“His IQ is extremely high and his football IQ is growing and he is learning how to take information from the film room, down and distance, formation and situational football and apply that knowledge to make sure he is in the correct place to make plays,” Nations said.

Willis is on the grind to perfect and hone his craft in any way possible.

“He has the top work ethic of any of our athletes.  I would compare him to a young man that I coached that made it to the NFL in terms of work ethic, Aaron Ripkowski,” Nations said. “Neither of these players will allow you to outwork them. Cam has that mentality.”

Nations explains why he thinks Willis can evolve into a similar type of player as this standout.

“I believe that he has the potential to grow into a great ILB much like his cousin Devon White,” Nations said.

Willis patterns his mentality after this legend.

“My favorite professional player is Tom Brady because of how he was doubted,” Willis said. “He started from the bottom all the way with the last pick in the NFL draft to being a six-time Super Bowl champion  .”

Willis is constantly striving for greatness in everything that he does.

“My goals off the field are to continue being an honor student and don’t solely rely on sports to give me a free education,” Willis said.

“My dream college is to play anywhere that would give me a chance to be able to play pro football,” Willis said.

Willis lists math as his favorite subject in school.

“It’s only a right or wrong answer and it's very straight forward,” Willis said.

Nations lists the improvements that will take Willis’ game to the next level.

“Cam needs to work on his feet and his hip quickness,” Nations said. “He knows his needs, and he works those things all of the time to get ready.”

Nations believes the sky is the limit as long as Willis continues to stay hungry.

“Cam's work ethic and intelligence will make him a D-I player,” Nations said. “His heart will take him wherever he wants to go. Great young man.”