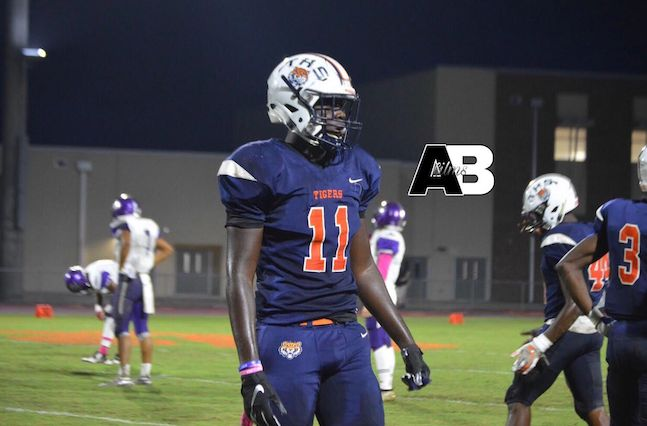 Myles Winslow is one of the best players from the Orlando, FL area in the Class of 2021.

The 6-foot-4, 225-pound Winslow, who attends Tohopekaliga High School, is an imposing player that works as a defensive end, outside linebacker, and tight end. 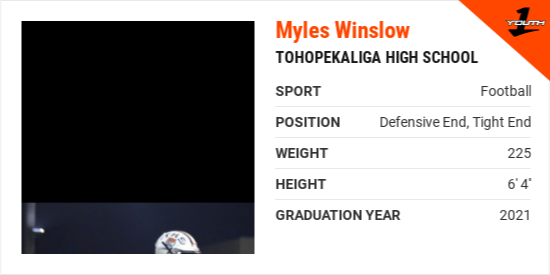 Winslow has earned plenty of recognition during his career, such as: NUC All American Game selection, Defensive MVP, FBU selection.

Winslow is humbled by the recognition.

“I appreciate being selected for All-Star teams and receiving awards. Goes to show how hard work pays off,” Winslow said. “It was a great experience being able to play and compete with players from many different states. I was able to make friends with guys and still stay in touch afterwards.”

No matter the opponent, every game Winslow is determined to give it his all.

Winslow is going all out.

The motor is always at full throttle whenever Winslow steps between the lines.

“My mindset is to be aggressive!” Winslow said. “I have a job to do and I have to make sure I’m doing whatever it takes to make the play and get to the ball.”

Winslow has great passion and energy whenever he’s on the field. Winslow tells why he enjoys the game of football so much.

“I enjoy the hard hitting!” Winslow said. “When my time comes together and we play cohesively, it looks and feels amazing.”

Winslow has learned many valuable lessons from playing football that he applies to his everyday life.

“Football teaches discipline and respect,” Winslow said. “Playing football you have to work hard and never give up.”

“One of my favorite memories was when my team was up by a touchdown. The other team had the ball and picked up the momentum,” Winslow said. “Quarterback scrambled away from me and I ran him down and made the tackle.  We ultimately won the game. This was a great feeling because I did what I had to do to stop the run.”

Winslow takes his role as one of the leaders on the team very seriously. Winslow makes sure he’s a daily positive influence on his peers.

“I demonstrate being a good teammate by helping others stay  motivated, and role modeling how to be the best they can be. My teammates and coaches are my extended family. It’s true   brotherhood,” Winslow said. “ Best advice I’ve given was to one of my teammates that he    needed to work harder when he wanted to give up. I told him the more he practiced the better he would get. The coach’s job was to be tough on us to make us better.”

Winslow is appreciative of having amazing male role models that are supportive.

“My coaches saw potential in me that I didn’t know I had. They held me accountable by challenging me to go harder.  My coaches talk to me about life and being a better man. We have FCA togetherness and this helped me as well,” Winslow said. “They tell me to be a leader on and off the field.  Coach Dease, my head coach talks to me all the time about accepting change. He helps me realize every day I may have to make changes and to be ready and stay positive.”

Winslow patterns his play after these standouts.

“College— Chase Young. I love his aggressiveness and his explosiveness,” Winslow said. “NFL, Von Miller— The way Von bends off the edge is sick!”

Winslow lists history and P.E. as his favorite subjects in school.

“History teaches about the world, past and present and PE because I love staying active and playing sports,” Winslow said.

“I want to play college ball! That’s my dream college!!” Winslow said. “I love the game and can’t wait to play on the next level!”

Winslow is striving for greatness in all that he does.