Athletes of all ages were making an impact at the 2015 Kentucky/Tennessee Futures Games, and Tennessee running back Elijah Howard was one of the standouts. 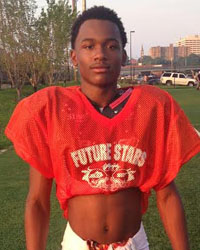 Howard is a 5’10, 157 pound running back for the class of 2020, and was a major factor for the 7th grade Tennessee offensive unit. Howard found the end zone twice during the game, which ultimately helped Tennessee defeat Kentucky with ease, 32-0.

The game was a major showcase for Howard, and he was enjoying his time playing for his home state.

“It was good, because you’re playing with a lot of other good players from around, and getting to know people and build relationships with them,” Howard said. “I feel that I played pretty good.”

With Howard and so many others playing well for the state of Tennessee, the state was able to get the sweep over the state of Kentucky for both 7th and 8th grade. Howard was honored to be a part of the win for his home state.

“It felt pretty good knowing that you helped your team and played a big part,” Howard said.

Howard was able to get two scores, and showed versatility in his game. The first score was a run play up the middle, which Howard broke to the outside and turned on the burners for a 70-yard score.

The second touchdown came on a kick return, where Howard went untouched for 80 yards to the house. This dynamic and explosive playmaking from Howard was strong enough to earn him the honor of offensive MVP for the state of Tennessee, something he was excited to earn.

“It feels good,” Howard said. “All of the hard work I put into it, and then getting recognized for it is special.”

As for the rest of the summer, Howard won’t be participating in too much football, but instead, turning his attention to another sport he excels at – AAU track.

He’ll still be working on parts of his football game by himself, trying to keep himself ready for the upcoming football season.

“I’m not playing any summer, I’ll be running AAU track,” Howard said. “I’m going to doing a lot of football training, though. Agility drills, working on my footwork, stuff like that.”