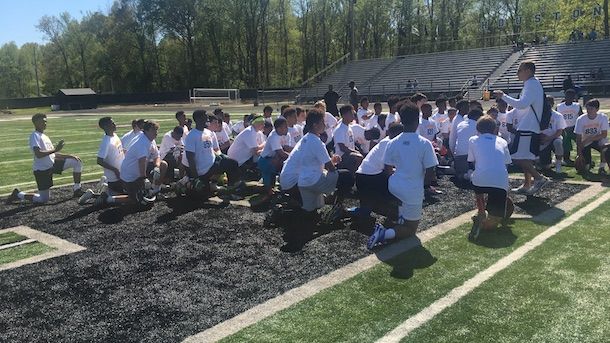 The Kentucky vs. Tennessee Star game is right around the corner, on June 17th. Now, the TN Future Stars are holding tryouts in various cities around the state scoping out the best talents from respective regions. Recently, the talented youth athletes of Memphis came out to participate in a competitive tryout in hopes of earning a spot on the TN roster.

Here are the top performers from the Memphis tryout.

Fisher is a long, tall QB with nice mechanics. He also has a nice arm and can make all the throws. Fisher is a very coachable athlete as well.

Started off the day a little slow but improved with every drill and throw. Made some really good throws to WR's. Soon as he locks down a couple small fundamentals he's going to be really good.

Young was a standout among the 7th grade quarterbacks, displaying a strong arm, sound footwork and solid throwing mechanics. He shined during QB drills, making all the throws with precision.

Wilkinson stood out on both sides of the ball. He’s very coachable and is a quick learner. He showed good ability to throw the ball on offense and had sound technique during the linebacker drills. Wilkinson was among the hardest workers at the Memphis tryout, out working many of his peers.

Puckett has good size and a big arm. He can throw the ball a long way. He made some nice throws and also missed some throws, but overall had a solid day.

Maddox is a committed young athlete; making the long drive from middle TN to attend the Memphis tryout. Mason was trying out for the second week in a row and he showed nice improvement from his Nashville tryout. He takes coaching really well. He made some really nice throws. Maddox showed solid fundamentals throughout the day.

Williamson’s talent was evident from the beginning of the tryout. He was standout during each of the running back drills and never failed to make the right play. He also showed good hands for a running back, which is always a positive.

Jones was among the most talented backs at the tryout. He outworked many of his peers during running back drills with his ability to learn quick, use his great speed and agility.

Ayers was among the most talented athletes at the Memphis tryout. His mix of speed, agility and great hands, made him a standout in every drill. Ayers even spent some time going through drills with the 8th grade running backs toward the end of the tryout. Ayers also showed smoothness on his dropbacks at DB. He has good ball skills and quick ball recognition ability.

Hayden was able to showcase his speed and quickness throughout the day. He worked hard through every drill and was among the most coachable athletes on the field.

Johnson is a natural born WR. His talent is tremendous. Johnson runs great routes, has great size at almost 6’2”, and was the best pass-catcher at the tryout. He made one handed catches with ease and felt comfortable with all eyes on him. Kid has big game.

Phillips has good speed and good hands. He was coachable and took in everything he could from the coaches without having to be told more than once. He performed well during every drill by running good routes, showing quickness and agility, and catching most of the balls thrown his direction.

Franklin was very impressive at both WR and DB throughout the day. His ability to run smooth routes, makes tough catches, and use his speed, made him a standout among the 7th grade group. He even took time to be a bit of a leader, helping other players along as needed. Nice young talented receiver. Franklin was also a standout at DB, making plays on the ball in every drill.

Grayson showcased his speed and good hands throughout each drill. He runs hard, precise routes and is good a locating the ball quickly. He made some tough catches during WR drills. Grayson was also a standout on defense at DB. He showed good ball location skills and quick hips on his dropbacks.

Boyland was stud on the line throughout the day. Throughout the tryout Boyland showcased his power, sound technique, superb blocking and dominant pass rushing ability. One of the most impressive athletes at the tryout.

Smith displayed great blocking and pass rushing ability throughout the lineman drills. He is constant working and has a motor that never stops. He’s determined to out work and out muscle his opponent. Had a heck of a tryout.

Check out the standouts from the Nashville tryouts --> here.

For more on the TN Future Stars visit their website --> here.