Young Guns 12U Mash through Road to the Elite Super NIT

Young Guns 12U Mash through Road to the Elite Super NIT 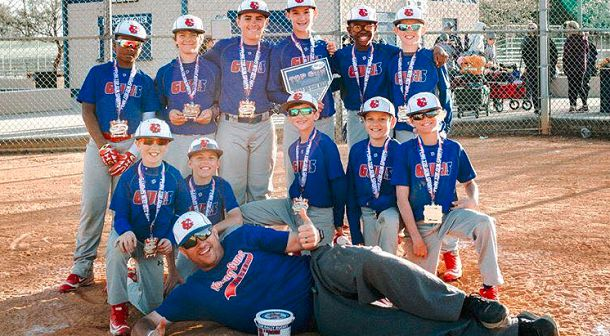 The Cookeville Young Guns 12U (pictured above) from Tennessee made an eye-opening USSSA tournament debut this past weekend at the Road to the Elite Super NIT by going 5-0 and outscoring opponents by a 76-18 margin. Manager Matt Wilson entered his squad in this 12-team Major classified field to compete against some of the region’s most talented teams, and his was by far the best.

The entire tournament attracted over 100 teams across 12 different age classifications and divisions to the Cullman-Hoover-Athens area of Alabama. The 12-Major division was formatted by a pool play round into single elimination bracket competition. Each squad would make the second round no matter their record or run differential.

The Young Guns began its tournament with a matchup versus VBA 12U, a AAA team from the host state. In what served as a wakeup call to the rest of the field, the Young Guns scored 28 runs in a 21 run trouncing which was more indicative of a football final score. Rashaun Strickland started on the mound and pitched two innings for the winning side as Masin Hall and Justin Fallon each threw one frame to close out the run-rule shortened affair. That same day the Young Guns pounded another AAA team from Alabama, the Ballers, 17-3. In this game Malachai Halterman pitched two innings and Rookie Allison cleaned up the rest of the rout on the mound.

Believe it or not, the Young Guns were given the fourth overall seed after pool play despite going 2-0 and scoring 45 runs. The first tiebreaker was average runs allowed and with a number of 5, they fell behind fellow 2-0 teams: Bulls Baseball Lybarger, East Coast Sox 12u Marsh and Shockwave 12U.

By earning a top four seed the Young Guns received a first round bye which saved them from having to win four elimination games in one day to win the title. They played the East Coast Sox 12U Odom who previously defeated VBA 12U 7-2 to reach the quarterfinals. The Young Guns were tested and yielded 7 runs, but their offense bailed them out and they won 9-7.

They would matchup versus the top seeded Bulls Baseball in the semifinals who had just out-slugged the Alabama Rebels 11-7. In the result of the tournament the Young Guns demolished the previously-unbeaten Bulls Baseball 16-0. Rashaun Strickland went the entire distance on the mound pitching four outstanding innings and advancing his squad to the title tilt.

After taking down the No.1 seed, the Young Guns had a crack at the No.2 overall seed in the finals. The East Coast Sox won its first two elimination games by a combined total of 24-7 and posed a big threat to the No.4 seeds. In the end, the out-of-staters took down the Major Alabama-based Sox 6-1 and proved they could win in various fashions.