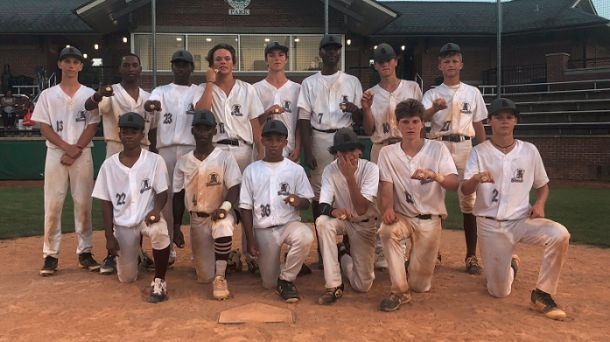 The T24 Gamecocks- Zohner (14-AAA) won this past weekend’s Beast of the East Select30 Super NIT in Charlotte, North Carolina, by going 5-0 overall and outscoring opponents by a combined 41-15 margin. Earlier this month, manager Sheldon Brown’s club captured the Race City Classic NIT title with a 4-0 record and +40 run differential. These were the first two USSSA tournaments the Gamecocks entered in 2019.

The Beast of the East 14-Major division attracted 11 total teams who used BBCOR bats and hailed from North Carolina, South Carolina and Tennessee. Each squad played two pool games and then were seeded based on record and average runs allowed. The following day of competition was comprised of a single elimination bracket phase that all 11 would qualify for.

The Gamecocks got off to a fast start as they demolished their first opponent, the Carolina Havoc, 14-4. In this run-rule shortened game, the Gamecocks downed the Major-classified Havoc on the strength of its bats and two innings a piece on the mound from Ashton Phillips and River Joye. The boys from York, South Carolina, rested up and played its second pool game the following day against the Bluechip Athletes from North Carolina. The Gamecocks hung another victory, 9-4, over another Major team to move to 2-0. Mario English led the way on the mound with 3.2 IP with plenty of credit to Jonathan Douglas who recorded 7 outs.

The Gamecocks were seeded third overall at the conclusion of the first round as five total teams finished 2-0. Only Iron Horse Baseball and the SBA Nationals had slightly better average runs allowed figures, which was the tiebreaker metric. By virtue of their seed, the Gamecocks did earn a first-round bye in bracket play, but would have to win three consecutive elimination games in the same day to hoist this Super NIT trophy.

A rematch was set in the quarterfinals as the Havoc defeated its first round opponent 11-3. In a similar, but not as lopsided result as the first meeting, the Gamecocks eliminated the Carolina Havoc 7-2 behind a complete-game six inning effort from River Joye. In the semifinals Brown’s squad squared off with the SBA Futures, a 13-Major team from the host state. In this game Ashton Phillips went the distance, throwing six excellent innings to propel his team into the championship game.

The 5-Star Tigers (Winston Salem) proved to be formidable opponents as they were 4-0 in the Super NIT at that point with a single defeat on the season in 17 contests. The Gamecocks saved their ace for this occasion and unleashed Xavier Pelzer who sparkled with 7 innings, three strikeouts and two runs allowed. The boys from South Carolina plated seven runs led by Jack Peeler who went 3-for-3 with two RBIs.

The Gamecocks are back in action this weekend at the Gamecocks Elite 8 Invitational where they’ll be playing the South Carolina Chaos and Stars Baseball on Saturday with Canes SC and Chapin Baseball awaiting a Sunday matchup.