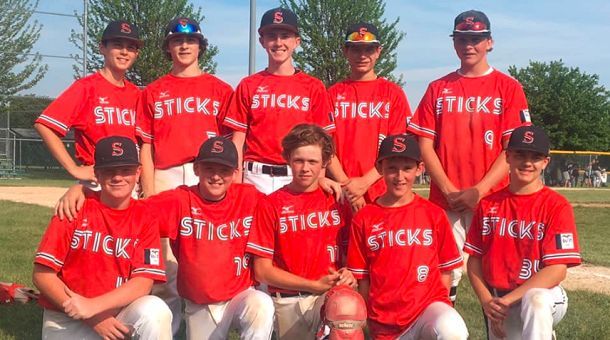 The Iowa Sticks 13U HS Prep squad broke through this past weekend to win its first USSSA tournament title in six tries this year. The boys from Waukee, Iowa, went 5-0 at the CIS Diamond Classic Global State tournament and outscored opponents 45-10 overall to hoist the trophy. Manager Jason Pearson’s team is now 11-7-2 overall on the year and has big plans ahead for the summer season.

The Central Iowa Sports Diamond Classic was a massive youth baseball event. It attracted 393 total teams across 31 different divisions spanning 8U to 14U. The Sticks’ division, 13-Major, fielded nine total teams, and all but one (Nebraska) hailed from the host state. Competition in Des Moines spanned two days as teams were broken into three pools of three to compete in a round robin phase before being placed into a single elimination bracket.

The Sticks began its tournament run against the Gretna Hurricanes, the lone team from Nebraska. The Sticks shutout the visitors 5-0 and dropped their record to 18-9. Jaden Peasley pitched all five innings for the winning team to get them off on the right note. The second and final pool game for Pearson’s club came against the Des Moines Cubs who entered the contest with an impressive 21-9 mark. The Sticks dispatched of them rather easily, winning by a 9-1 final tally. Pitching duties were broken up evenly across three arms as they each went two innings: Andrew McDonough, Brady Eklund and Grady Deering.

With a 2-0 record and 0.50 average runs allowed figure, the Iowa Sticks won Pool A and earned the second overall seed behind the Ankeny Blackhawks who had yet to surrender a single run. In the quarterfinals the Sticks had a rematch with the Hurricanes and this time it was an even more lopsided final score – 13 to 1. This run-rule shortened game however allowed Pearson to save some arms for a potentially long day of games ahead. McDonough pitched three innings before giving way to Brady Eklund to record the final three outs.

In the semifinals they faced a Cedar Rapids Reds team who entered with a 20-7 overall record, a 3-0 mark at the CIS Diamond Classic and winner of Pool B. This accomplished resume did not affect the Sticks however as they won convincingly, 7-3. The star of the game was pitcher Tyson Schilicher who went a complete-game six innings on the hill to carry his team into the finals.

Form held through the first couple rounds of elimination play as the No.1 and No.2 seeds met in the title match. The 13-Major Blackhawks were formidable opponents as they carried a 25-12 record into the matchup along with a Qualifier Tournament victory last month. The Sticks’ momentum and balanced offense proved to be too much to stop as they won comfortably 11-5.

They’ll be back in action this weekend at the Iowa Major State Tournament. The Sticks’ first opponent tomorrow will be the Waukee Lightning followed by consecutive days of action against these Ankeny Blackhawks and Barnstormer Outlaws.