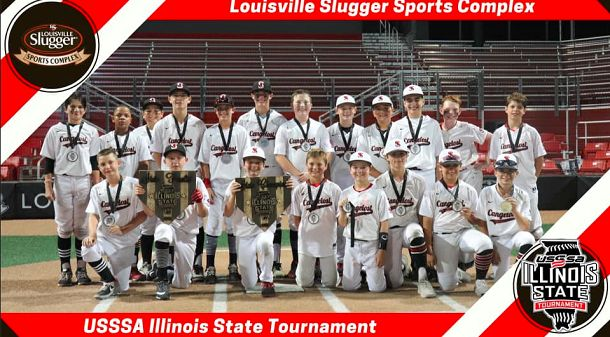 The Cangelosi Sparks (pictured above), from Lockport, Illinois, had two teams meet in the championship game of last week’s USSSA Illinois State Championship. The Sparks- Black with Manager Benny Infelise defeated its program-mates led by Dave Triezenberg 6-5 to win its second consecutive tournament title. The Sparks’ record is now 23-6-1 overall including 12-4-1 In Class.

The Illinois Major State Championship saw 17 total teams compete in the 12U division. The squads were broken up into five pools and competed in a round robin phase one. Then based on overall record and average runs allowed, the teams were seeded and placed in a single elimination bracket.

The Sparks-Black found itself in Pool A along with the Midwest Mafia from Illinois and the Gamers 12-Blue from Missouri. Infelise’s team began its run versus the Gamers who they defeated 10-4. Kaden Kopacz pitched five innings for the winning side and was relieved by Blake Jenner who recorded the final three outs. Against the Midwest Mafia, the Sparks’ offense once again produced 10 runs – this time only yielding two. JT Augustyniak pitched 2.2 innings and was followed by Chris Daughtery for 1.1 IP.

The Sparks-Black won its pool with a 2-0 record and were given a top seed while the other Sparks team in the field went 1-1 to finish third in a four-team Pool E. The Sparks-Black got back to action Sunday afternoon to take on the winner of the play-in game, South Gibson Heat. They would dispatch of the overmatched Heat 11-3 with two innings on the mound from Lorenzo Infelise and two from J.D. Cumbee.

The boys from Lockport would have to win four consecutive single elimination games in order to hoist the trophy, and they were off to a fast start. In the quarterfinals they ran into Morris Baseball- American 12U who was 1-1 in Pool C but coming off an 11-3 trouncing of its first round opponent. Morris gave the Sparks quite a game as the top seeds gutted out a tough 6-inning victory, 7-6. Daughtery led the way on the mound for the Sparks as he pitched four innings and Nathan O’Donnell entered in relief for 2.

The Pro Player Hurricanes- Dabe were waiting in the semifinals after a combined margin of victory of 20-8 in its first two elimination games. Cangelosi Black prevailed in yet another one-run game, this time by the final score of 5-4 to down the previously 7-1 Hurricanes. In the finals they met their program-mates who smashed the Gamers 12U Blue 14-5.

The Sparks went 6-0 overall across two days of competition and outscored opponents by a combined 49-24 margin.