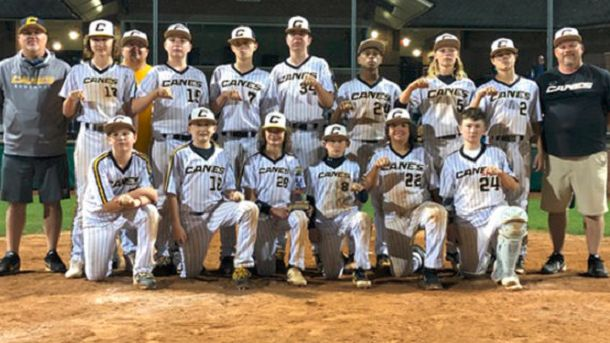 Canes Baseball 13U from Eastern, North Carolina (pictured above) won its 2019 debut USSSA tournament this past weekend at the Beast of the East Select30 Super NIT by going 6-0 overall and outscoring opponents 44-20. Manager Joe Johnson’s club is now 8-1-2 and poised to have a successful spring and summer season.

The 13-Major division of the Beast of the East Super NIT took place in Charlotte, North Carolina (the event also featured action in Greensboro and Morganton) and attracted 15 total teams from three states: North Carolina, Michigan and South Carolina. After a two game pool play round, each of the squads were seeded and advanced onto a single elimination bracket phase.

Canes Baseball began its schedule versus the Rawlings Prospects NC 2024. In what ultimately proved to be a tough game for two teams making its season debut, the Canes won narrowly, 6-5. Cameron Aycock and Michael Floirendo each threw two innings for the winning side while Leland Barrow and Peter Honse recorded 6 total outs of their own. The Canes wrapped up an undefeated pool round following up with a 7-1 victory over the Dirtbags Black Raleigh. Jimmy Williams and Jaxon Kehoe navigated the first four innings on the mound for the Canes while Bass Sterling pitched the final frame.

The Canes earned the No.2 overall seed behind the Dirtbags 13u TBM based on average runs allowed (1.5 against 3.0). The two other 2-0 teams at the conclusion of the pool round were the Dirtbags MVP and Five Star Carolina Smith. The top three squads earned a first round bye in the bracket phase.

On Sunday morning Canes Baseball played its first of four games required to win the title against the Carolina Stars. This was a nice way to ease into competition as the Canes won 8-0 in a mercy-rule shortened game. Kehoe led the way on the mound with 3 innings followed by Sterling with 2 as they combined for the shutout. In the quarterfinals the Canes met the Carolina Rockies- Wilson who trounced its first round opponent 12-0 and presented a challenge to the lower seed. The Canes prevailed 7-4 as Michael Floirendo was the star on the mound going 4 innings to set up a tough matchup against the three seeds, Dirtbag MVP.

The Canes once again put an 8-spot up on the scoreboard and relied on its stingy pitching and defense to hold their opponents to 3 runs. The star of the game was starting pitcher Leland Barrow who threw six innings and kept a powerful offense at bay. Cameron Aycock completed the final frame to move the 2-seeds onto the championship game.

The MCBC Hit Dogs, the only team from Michigan, made an outstanding run through bracket play. After a 1-1 pool round and the 8th seed, the Hit Dogs upset the top seeds in the quarterfinals in a 9-1 blowout then took down the fourth seeds 16-4 to fully announce their presence. They slugged it out against Canes Baseball but fell short, 8-7.

Manager Johnson used four pitchers, none for more than 7 outs, to ensure victory. Honse, Aycock, Floriendo and Williams all dug deep to win its sixth game in 2 days to hoist the trophy.