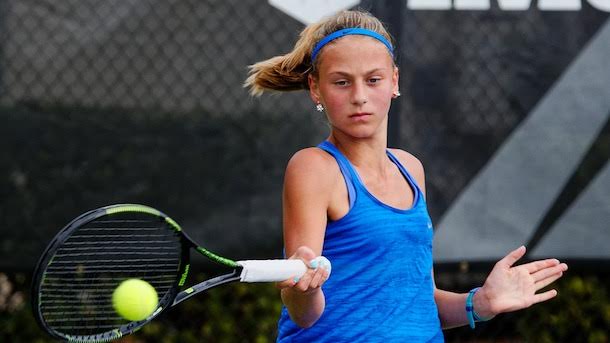 MELBOURNE - There were two seeded, but unexpected junior champions crowned at the 2017 Australian Open on Saturday when 11th-seeded Marta Kostyuk of Ukraine won the girls’ title and 15th-seeded Zsombor Piros of Hungary captured the boys’ trophy.
The 11th-seeded Kostyuk, a risk taker on-the-court and a bubbly personality off-the-court, had her way with top-seeded Rebeka Masarova of Switzerland 75 16 64 in 1 hour, 55 minutes.
She’s fresh-faced and only 14-years-old, but that didn’t stop Kostyuk from winning the title at the first Grand Slam junior tournament she’s played.
Not only did Kostyuk win the girls’ title, but she had a special meeting in mind when she arrived in Melbourne. That introduction finally came to pass on Saturday as well, arranged for her by her manager, Ivan Ljubicic, who also coaches Roger Federer.
“I met finally Roger today,” she said, smiling. “He congratulated me. And I took a photo with him, so I was very excited.”
The victory almost qualified Kostyuk, at 14 years, 7 months, as the youngest champion in Australian Open junior history. Nevertheless, that distinction belongs to Anastasia Pavyluchenkova of Russia, who was 14 years, 6 months and 27 days old when she won the first of her back-to-back Australian Open junior girls’ titles in 2006.
Nevertheless, this is not Kostyuk’s first special moment of her career. Last August, Kostyuk was on the winning Ukrainian team that won the 14-and-under ITF World Junior Tennis Finals in Prostejov, Czech Republic. Kostyuk led the Ukraine to a 2-1 final victory over the USA.
Masarova was the clear anticipated favorite in the encounter, a supposition bolstered by the fact she is the reigning Roland Garros champion.
“I congratulate Marta and it’s unbelievable to be a Grand Slam champion at just 14,” said Masarova, in her runner-up speech. “Being in two Grand Slam finals is amazing in my career. This is obviously a tough loss, but it was an amazing final.”
Kostyuk, playing with her left upper leg heavily wrapped and her right shoulder taped, finally gained the upper-hand in the match when Masarova was serving in the ninth game. At 15-40 in that game, Kostyuk broke serve with a winning backhand passing shot.
At 40-15 in the next game, Kostyuk took advantage of her lone match point with a forehand crosscourt winner.
Not surprisingly, Kostyuk plans to celebrate her victory in a way many of the Grand Slam champions do: “Maybe some shopping, I like it. Jewelry I don’t like. I lost everything. So more clothes.”
Piros, who has a reputation for being a budding illusionist, worked his tennis magic to take a 46 64 63 final win over fourth-seeded Yshai Oliel of Israel.
“I think it was my best match mentally,” Piros said. “I was focused all the match. That's why I won, I think. I was (to) be honest, after the first set, I lost my believe a little bit. I still surprise myself with this win.”
This was only Piros’ second Grand Slam main draw appearance - he played here in 2016, but lost in the first round.
As the 1 hour, 52 minute match inched along it was Oliel started to break down and make more of the errors.
In the third set, Piros saved the three break points he faced, and managed to break Oliel’s serve on one of three occasions.
There was a large standing room only crowd on hand for Oliel, but Piros believed they were helping him out as well.
The girls’ doubles champion were third-seeded Bianca Vanessa Andreescu of Canada and Carson Branstine of USA, who defeated the Polish pairing of Maja Chwalinska and Iga Swiatek 61 76 (4)
The boys’ doubles title went to fourth-seeded teaming of Hsu Yu Hsiou of Taipei and Zhao Lingxi of China, who defeated Finn Reynolds of New Zealand and Duarte Vale of Portugal 67 (8) 64[10-5]
x

This article first appeared on http://www.itftennis.com/news/251192.aspx, one of Youth1's sources for Tennis articles. To submit your site for consideration for Youth1 syndication, please email Laura Petrillo at lpetrillo@youth1.com.

Jasmine Middleton 5 years ago
next page?