Both Gianni Ross and Alexandra Sanford were making their first appearances in International Tennis Federation Grade 1 finals at the Asics Easter Bowlearlier this month at the Indian Wells Tennis Garden. They succeeded in making that new experience to a winning one, coming away with the trophies at the ITF Grade B1 event, closed to residents of the United States. The unseeded Ross defeated No. 4 seed John McNally 6-4, 7-6(3) in the boys championship match, with No. 8 seed Sanford overcoming No. 13 seed Ellie Douglas 6-4, 1-6, 6-1 in the girls final. 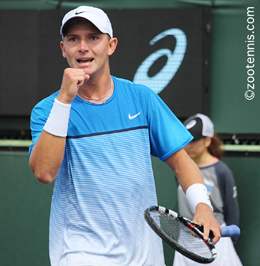 The scorching heat earlier in the week, with temperatures approaching 100 degrees, was long gone by the final weekend. No wind and temperatures in the 70s made for ideal playing and viewing conditions, with approximately 100 local tennis fans on hand to witness the tense boys final that kicked off finals day.

That streak ended in the final, when Ross hit two great returns at 4-5, 15-30 to take the opening set from his former Midwest section rival and doubles partner.

Ross, who was playing at a breakneck pace in the first set, slowed down in the second set, and after its sixth game, when McNally saved five break points in a nine-deuce game, the tide began to turn in McNally's favor.

In the next game, Ross was broken on a double fault and McNally took the lead in the set, which he held until serving at 5-4. McNally, a 17-year-old from Cincinnati, needed to save two break points in that game before finally earning a set point. Ross, who had been controlling many of the points from the baseline, hit an unexpected drop shot after a long rally on that set point and the ball spun back toward the net, giving McNally no chance to reach it.

"I have dump truck hands, would be the best way to put it," said Ross, a 17-year-old from Illinois who now lives in Boca Raton. "I got very lucky in that game. I was fortunate to get that game, at break point, I hit a good backhand down the line, but all in all, it was luck and luck."

McNally agreed that fortune favored Ross in that game.

Ross held for 6-5, and McNally put himself in peril right away in the next game, double faulting twice to start it. Ross could be heard telling himself to "use it," and after a forehand error to make it 15-30, he did, with another good return, this off a rare McNally first serve, giving him two match points.

On the first Ross hit a backhand long. On the second, McNally hit a good first serve and went on to take the game to force a tiebreaker.

"He's very good in tight moments, he has a big serve," said Ross, who is coached at the USTA National Training Center by Sylvain Guichard. "When I lost both those, I had to accept it, I guess, and tell myself that he did a very good job getting back, and when he got that game, I had to get ready for the breaker."

Ross lost the first point of the tiebreaker, when McNally smashed a ball right at him on a net putaway. McNally then took a 2-0 lead, but that was when his backhand, in particular, began to let him down. Ross got the mini-break back when McNally hit a backhand long, made a forehand error, then steered three straight backhands wide, giving Ross a 5-2 lead. Ross missed a volley to make it 5-3, but a good first serve forced McNally's backhand return long. With three match points, Ross needed only the first, when McNally netted a slice backhand a few shots into the rally.

"In the tiebreaker I was up 2-0 and missed a forehand, made five unforced errors in a row there, went down 5-2," said McNally, who has committed toOhio State for 2017. "You can't do that if you're going to beat those kind of guys. But it's a little bit unfortunate. If I win that second set, I think I'm taking that match. That 5-4 game will haunt me for a couple of weeks."

Ross said he couldn't remember the last time he had won a tournament.

"I proved a lot, though I guess just one tournament," said Ross, who saw his ITF ranking go from 192 to 70 with the title. "I played very well this entire tournament and I can't stop now. I've got to keep going, and hopefully the next one I play will be the same. There's a long way ahead, and this is a good starting point."

Sanford and Douglas had reached the final by playing some excellent tennis, with Sanford beating No. 4 seedMichaela Gordon 7-5, 6-3 in the quarterfinals and unseeded Hanna Chang6-4, 6-0 in the semifinals. Douglas defeated Ena Shibahara6-3, 6-2 to advance to the semifinals, where she took a 6-3, 6-4 decision from No. 9 seed Caty McNally, who had beaten top seed Maria Mateas in the quarterfinals.

In the final, Sanford, a 17-year-old from Westerville, Ohio, got a late break to take the first set from the 15-year-old Douglas, then broke to start the second set, only to watch Douglas reel off six straight games to even the match.

"We hit very similar balls and I felt like she was just hitting them better than I was," Sanford said of her performance in the second set. "She was pushing me back and hitting really aggressive and deep and catching me off guard with some down the lines, and some very, very aggressive shots."

Sanford, who had not lost a set all tournament until that one, said she might have let down in that set.

"I may have relaxed a little too much," said Sanford, who is committed to North Carolina for the fall. "I was trying to think a lot on the court, mix up my pace, and in the second set, I think I got too comfortable and was just banging back and forth with her. That gave her a kind of a rhythm and she swung for it and her shots were going in, and most of them were winners."

Sanford got a break to take a 3-1 lead in the third set, then came from 15-40 down to consolidate it. Douglas's drop shots were very effective in the first two sets, but Sanford used one of her own to save that first break point and hit a good first serve to save the second.

Douglas's impressive serve was becoming less reliable as the match wore on and she was broken again, starting the sixth game with a double fault. She would save two break points in that game, but not the third, and Sanford stepped to the line to serve for the match. She earned two match points when a Douglas return went long, and although Sanford missed the first with a backhand long, she didn't get tentative, hitting a backhand winner to close out the nearly two-hour match.

"I feel like I had several chances, many, many game points that I didn't convert on," said Douglas, of McKinney, Texas. "A few dumb errors, and my serve was really off, way too many double faults. I think she stepped into the court very well and was very aggressive. I think I played too short, gave her too much of an opportunity to do that. I played really well up until this match, in the quarters and semis, I was very happy with that, because I hadn't been doing so great. I wish I could have played a little better today, but that's OK."

Sanford noted that the level of play was not consistently outstanding.

"I don't think either of us played as well as we would have hoped," said Sanford, who has been working with USTA coach Henner Nehles since the beginning of the year. "I think there were a lot of unforced errors, but then again, we're both very aggressive players and that happens when you go for the shots you go for."

Sanford, now into the Top 30 of the ITF junior world rankings, has not decided whether she will play the junior slams this summer or stay in the United States to play Pro Circuit events.

All four of the finalists received $750 vouchers for travel expenses, a pioneering effort by the Easter Bowl's tournament director Lorne Kuhle, who hopes the concept will be adopted by other junior tournaments to defray some of the costs associated with junior tennis competition in the United States. Those reaching the round of 16 received $150 vouchers, with quarterfinalists getting $325 and semifinalists $500. 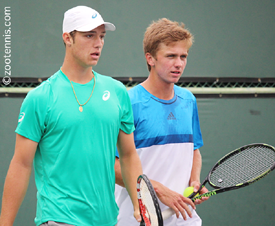 Fans who preferred doubles could concentrate on the adjacent court, where the championships were played at the same time as the singles finals.

In the girls final, unseeded Elysia Boltonand Chiara Lommer came from behind to claim a 4-6, 6-2, 10-8 victory over No. 6 seeds Victoria Emma and Sofia Sewing.

Bolton and Lommer, who played together for the first time in years at the International Spring Championships Grade 1, trailed 6-2 in the match tiebreaker, but won eight of the next ten points to capture the title.

"We knew our game plan and we knew we had to stay positive," said Bolton, who trains both with the USTA in New York, where she now lives, and in Illinois, returning there often to work with longtime coach Mark Bey.

"We had been pulling out a lot of those tiebreakers, [in Carson] too, and we pulled out a tiebreaker against Sewing there," said Michigan recruit Lommer, who is coached by Jason Winegar in Lincolnshire, Illinois. "We had each others back. We grew up together."

"We've known each other since we were six, seven, so we have good chemistry," said Bolton.

With Van Emburgh serving at 4-5 in the second set, he and Ponwith fell behind 15-40, but saved all three match points.

"I missed two first serves," said Van Emburgh, who now trains at the IMG Academy in Bradenton, Florida. "Pulled out those second serves, made sure not to miss them in the net."

In the match tiebreaker, Van Emburgh and Ponwith led 9-6, but Korda and Kirkov won the two points on Korda's serve. With one more match point on Ponwith's serve this time, Van Emburgh missed a volley, and another change of ends was necessary. Another match point came and went at 10-9, but after a Ponwith volley winner gave them match point No. 5, they converted when Kirkov's volley hit the tape and dropped back on his side of the net.

Ponwith and Van Emburgh were a last-minute pairing, although Ponwith should have no trouble getting doubles partners. In the past two years, in the two big Southern California tournaments, Ponwith has made the doubles final in all four events, with three different partners. Last year, Ponwith won the Easter Bowl doubles title with Cameron Klinger, over Kirkov and Sam Riffice. Just a week before, he and William Blumberg had won the doubles title in Carson, after reaching the final there in 2015.

"Different partner, same result," said Ponwith, who has signed with theUniversity of Georgia for this fall. "We played well together, especially for the first time," Van Emburgh added. "We had a lot of 10-point tiebreakers in a row, so we went into this one pretty confident."