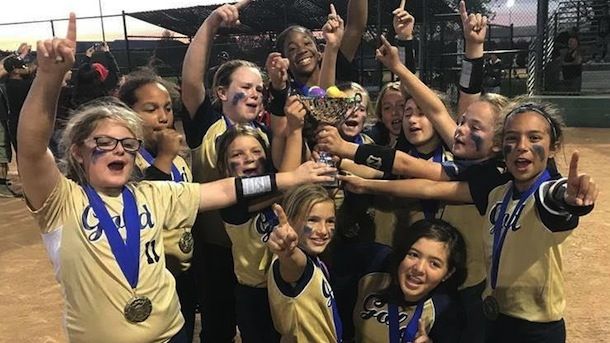 (Sacramento/Elk Grove, CA) – Over the holiday weekend, Sacramento/Elk Grove California was the place to be as fastpitch teams from across the state took to the fields and brought the heat to the Easter Saturday – Sacramento/Elk Grove tournament. Fastpitch squads in the 14U, 12U, and 10U put on an exciting display of power, fundamentals, good sportsmanship, and overall great competitive softball, and we are breaking down each division and how it all went down.

Cali Crew Fastpitch Quillin is an impressive 9-1 in their last 10 games, and 19-6 in their last 25 games. The squad is on a seven game win streak and had two 1st place finishes back in the fall at both the [15 open] All Star Invitational (Sacramento, CA) (5-1), and at the [15 open] Monster Mash (Sacramento/Elk Grove/Roseville) (6-0).

Offensive highlights for Foothill Gold – Williams included five of the girls hitting over .700 in tournament play. Jillian Todd put up a .750 batting average with three hits and three walks. Niyah Brown produced six hits and drew a walk, while also driving in five RBI. Phoebe Ossola successfully had three hits and four RBI, while Ava Williams produced five hits, three walks, two doubles, and 4 RBI. The top of the lineup, Ossola, Emily Morris, and Williams got work done on the basepath, as the trio scored a combined 22 runs over the course of four games.

On the mound, the pitching squad went to work. Morris produced 18 strikeouts, four walks, and one earned run over the course of 8.1 innings pitched. Imogen Ivangkeo put 20 strikeouts in the books, and gave up just five walks and two earned runs over 7.2 innings of work.

Head coach, Evan Williams gave his take on the overall tournament, his team’s success, and what’s next for Foothill Gold – Williams.

“Foothill Gold Williams finished the month of March winning 13 of our last 15 games (17-6 overall) and taking home the USSSA Easter Saturday Gold Bracket Championship! We built a whole new team from scratch starting in November 2017 and couldn't have scripted our first tournament month of 2018 any better. We liked the idea of getting in a few extra games in the one-day format on Easter weekend. We are always excited to compete!

As the head coach of Foothill Gold Williams, our goal each and every weekend is to have fun, give it our best effort from start to finish, improve every time we step on the field, be a good teammate and have a good attitude. Our ultimate goal is to win the Gold Bracket Championship every tournament that we participate in. We believe we are good enough to compete with anyone!

Since we started building this team in November of 2017, we have consistently talked to our girls about the culture we are trying to create at Foothill Gold Williams. Because we have a group of new players, one of our strongest points is the idea of "TEAM". Together Everybody Achieves More! Individually, we all have talent. In order to win, we have to work together as a team. Support each other, cheer each other up when we strikeout or make an error and get right back up after making a mistake and continue to cheer on your teammates.”

Up next for Foothill Gold – Williams includes, the USSSA Queen of the Hill tournament this weekend, where head coach Williams says his team is, “Ready to battle for the gold bracket championship.” The squad also has their sights set on the USSSA Crazy Socks tournament in May at Big League Dreams, and in June at Nationals in Reno, NV.