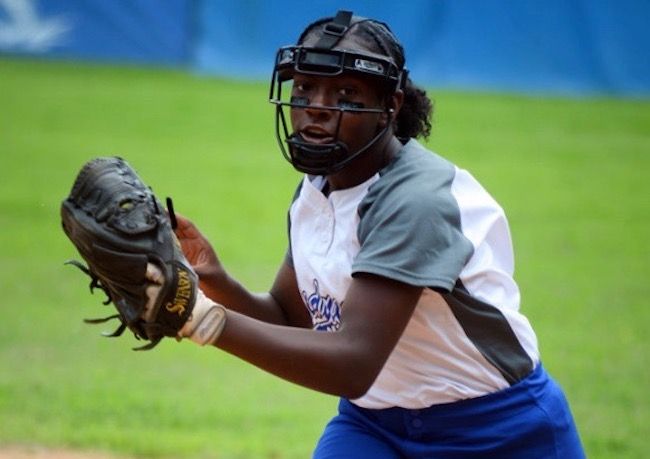 Audreya White is one of the best players from the Paducah, Kentucky area in the Class of 2025.

The 5-foot-1, 125-pound White, who attends Paducah Middle School, is a dynamic player that works as a second baseman for the Knights 05’ Premier Team.

White has earned plenty of recognition during her career, such as: Miss Hustle Award (2017), MVP at travel ball tournament with Lady Storm (2018) and the Silver Slugger Award (2019).

White is humbled by the accolades.

“I was very thankful to earn those awards but they also motivated me to work even harder,” White said.

No matter the opponent, every game White is determined to give it her all.

White is going all out.

The motor is always at full throttle whenever White steps between the lines.

“A mindset I like to have while approaching my position is to be prepared, play my hardest, and to not let my teammates down,” White said.

White has great passion and energy whenever she’s on the field. White tells why she enjoys the game of softball so much.

“What I love most about playing is the process,” White said. “Just putting in the hard work and then watching it pay off is the best feeling to me.”

“One of my favorite memories while playing is in 2018, when I was playing in a state travel ball championship in Tennessee as a pick-up player with the Lady Dawgs. The championship game was on the line,” White said. “We were down one run, I had just batted in the game tying run which landed me on first base. I then stole every base for the walk-off win. It felt good to know that I did everything I was expected to do while coming in to play as a pickup player.”

Jill Frost has coached White for three seasons, now with the Knights.

“She’s quick and has great range. I love her ability to assess the situation quickly and commit to the play,” Frost said. “Audreya started out in the outfield for me. Her speed and all-out attitude was a great combination.”

White takes her role as one of the leaders on the team very seriously. White makes sure she’s a daily positive influence on her peers.

“I demonstrate being a good teammate by doing my job and leading by example through encouragement and just doing what’s right on and off the field,” White said. “Some advice I’ve given my teammates is that if we all do our jobs and we play for each other, we will be in position to win.”

Frost adds that White is one of those consummate teammates that every squad needs to be successful.

“Audreya is definitely a leader by example. Don’t get me wrong, she’s vocal and lifts up her teammates and shows her passion for the game, but it’s what she does when she thinks no one is watching that’s the ‘loudest’,” Frost said. “At tournaments, between games, you can find her scouting out the competition, working on her swing, or keeping loose and stretching. It’s quite clear she is self motivated and wants to be the best player she can for her team. People notice and it’s contagious. I love it.”

White is appreciative of having amazing role models that are supportive.

“Some advice my coaches have given me is to keep God first, to work hard on and off the field and simply to just follow my dreams,” White said. “The best advice I’ve ever been given by a coach was from Coach Emily who said to move on to the next play. It’s helped me to remind myself that I’m human and I’m going to make mistakes, but after I make them to adjust and move forward instead of dwelling on them.”

Frost is an advocate of White’s capabilities.

“I have a long list of favorite plays. She’s so fun to watch,” Frost said. “On defense, it’s the down and dirty stops with a quick flip from her glove for the out, or running down a pop up foul ball to the fence. Offensively, her on-base percentage and number of stolen bases speak for themselves. The girl can fly.”

White has excellent awareness that puts her in position to thrive.

“It’s been so rewarding watching her game IQ grow,” Frost said. “In the beginning, I could tell she was so hungry to learn. She soaked up all the information she could and uses that knowledge to strengthen her abilities.”

White is on the grind to perfect and hone her craft in any way possible. Frost loves White’s drive and determination.

“I wish I could bottle up her work ethic and sell it. I’d be rich. She goes to every camp she can. She’s humble enough to want to learn from every opportunity she has,” Frost said. “She sends me pictures of her 5:30 a.m. workouts or supplemental training that she does on her own. This kid is always reminding me what passion and drive look like. It’s awesome.”

“My dream school is UCLA. Over the years I've watched them play and I too wanted to be a Bruin,” White said. “This summer when they won the national championship it made me want to play for them even more.”

Frost explains why she compares White to this standout Bruin.

“I always think of Audreya when I’m watching UCLA play. She reminds me of Kinsley Washington,” Frost said. “She’s such a versatile player with tons of speed and tons of smiles. Such a positive, hard working athlete with so much potential.”

White patterns her mentality after this inspirational second baseman.

“A person I aspire to be like is Sis Bates, a 5-foot-4 second-baseman for the University of Washington,” White said. “I was once told that I would be too small to play second base at a Division I level. Yet, Sis Bates is named Pac-12 Defensive Player of the Year at the same position as me.”

Frost lists the improvements that can take White’s game to the next level.

“We’re working on arm strength and quicker transfers,” Frost said. “She’s learned a lot of strength exercises and continues to work on her own time as well as at practice.”

White is striving for greatness in all that she does.

“My goal on and off the field is to be the best version of myself that I can be and to inspire other young people to look up to me as I do others,” White said.

Frost believes the sky is the limit as long as White continues to stay hungry.

“She’s so naturally gifted, learns so quickly, and has the ‘want-to’ that you just can’t teach,” Frost said. “I feel very lucky to be on this journey with her and have no doubt it will continue to the next level.”