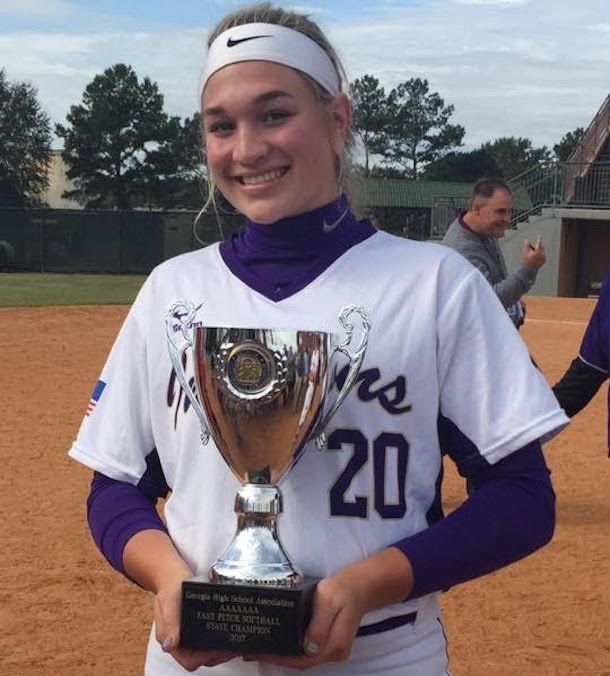 Aniston Wright is one of the best players from the Sharpsburg, GA area in the Class of 2020.

The 5-foot-8, 170-pound Wright, who attends East Coweta High School, is a dynamic player that works as a pitcher.

Wright, who is committed to Georgia State, has earned plenty of recognition during her outstanding career, such as being a three-time First-Team All-Region and three-time All-County selection, along with winning two state titles.

Wright is humbled by the accolades.

No matter the opponent, on each play Wright is determined to give it her all.

Wright is going all out.

The motor is always at full throttle whenever Wright steps between the lines.

“My mindset is to dominate every pitch. I want to help my team win games,” Wright said. “I want the opponent to not get anything easy when I’m out there on the field.”

Wright has great passion and energy whenever she’s on the diamond. Wright tells why she enjoys the game of softball so much.

“I love building lifelong friendships with the people that I know who have my back,” Wright said. “My teammates would go through thick and thin for me and I would do the same for them.”

Wright has learned many valuable lessons from playing softball that she applies to her everyday life.

“It has taught me how to overcome adversity and how to deal being under stressful situations,” Wright said. “I know that I have to work for what I get and that nothing will ever just be given to me.”

“This was my sophomore year and we were playing Kennesaw Mountain. I was up to bat and there were two girls on base. I hit a three-run home run and that allowed us to advance to the next round that later allowed us to win our first state championship,” Wright said. “That is one of the most proud and memorable moments I have while playing.”

“At pitcher Aniston has an outstanding fastball that has a lot of movement on it, as well as a great changeup,” DeLoach said. “At pitcher, she is a very physically pitcher and that allows her to pitch a lot off of her fastball. As a hitter she has a lot of pop off the bat.”

Wright takes her role as one of the leaders on the team very seriously. Wright makes sure she’s a daily positive influence on her peers.

“Any time a teammate of mine is having a tough time on or off the field, I try my best to talk them up and let them know that I am in their corner. I wait until my number is called to go perform like I know how and if I am not chosen to be on the starting lineup, I wait my turn and I do not complain about playing. I am just as happy for my teammates as I would be for myself,” Wright said. “I tell my teammates that we are not robots, we will never be perfect. This game is meant for failure and for you to have been able to be successful is amazing. Do not let you head beat you down. Do not be your own enemy. Know your worth and go perform like you have a million times before.”

DeLoach adds that Wright is one of those consummate teammates that every squad needs to be successful.

“Aniston is a great leader with a lot of love in her heart for her teammates,” DeLoach said. “Her mindset is always ‘What can I do to help the team?’”

Wright is appreciative of having amazing role models that are supportive.

“They teach us there is seven innings to play and a lifetime to remember. You will remember the experience you have rather than your batting average 20 years from now. This game is about having fun and you can’t do that if you’re too tense or stressed out. Give everything you have and it will happen,” Wright said. “They tell us to calm myself down. That this game does not define who I am as a person. You’re a teammate first and then an athlete.”

DeLoach is an advocate of Wright's capabilities.

“In the 2017 state championship tournament Aniston hit a go-ahead home run late in the game in the winners bracket semifinal game,” DeLoach said. “We wouldn’t have won the championship without her efforts.”

Wright is on the grind to perfect and hone her craft in any way possible.

“She is always working to get better year around. She doesn’t take any shortcuts and wants to be great,” DeLoach said. “She’s a positive example for her peers to follow.”

Wright is constantly striving for greatness in everything that she does.

“My goal is to go out and have fun but dominate at the same time,” Wright said. “I want to leave it all out there on the field and have no regrets.”

Wright patterns her play after this athlete.

“Carley Hoover is who I look up to because she works so hard and it pays off so much,” Wright said.

Wright explains why she committed to Georgia State.

“My dream school is Georgia State because the coaches are so genuine and they treat you like a player rather than just a number on their team,” Wright said. “They have given me the opportunity to play college softball with a full ride scholarship.”

Wright lists marine psychology as her favorite subject in school.

“I would love to be a psychiatrist when I graduate college,” Wright said.

DeLoach is confident Wright is willing to do whatever it takes to keep growing as a player.

“As for pitching, I have had a lot of conversations with Aniston to not be afraid to pitch to contact and to stay very focused between innings before going to the circle the next inning,” DeLoach said. “As for hitting, I talk to her about staying positive and keep working. Softball is a negative sport and failing seven out of 10 times is still considered very good.”

DeLoach believes the sky is the limit as long as Wright continues to stay hungry.

“With her work ethic and love for her teammates and the game I feel like she will be able to pitch and hit in college at the D1 level,” DeLoach said.