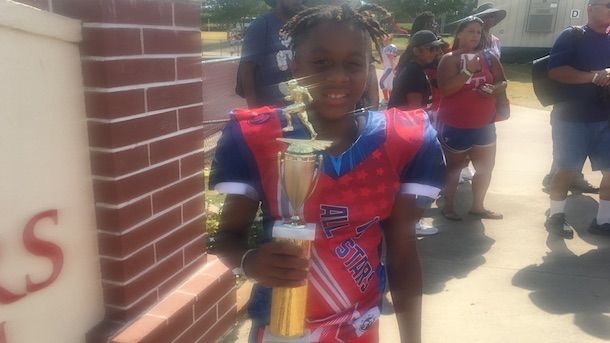 The 5th grade game was one of the more competitive contests of the day, with both squads playing high-level ball on the defensive side especially.

RB Michael Henderson III got things going in the 1st half for the White squad with a big reverse run for 30 yards. On the next play, Henderson III would break free for a big run across the field for a touchdown.

Before the close of the half, Red team Safety DeShawn Smith would get an impressive interception to give Red the ball back with 45 seconds left in 2nd quarter. They would get the ball back at midfield with opportunity to put some points on the board.

White would soon get the ball back with 14 seconds left in the half, as the Red QB fumbled the ball on a QB keeper. The score remained 6-0 going into the half.

Both teams would battle throughout the 3rd quarter, but neither team could get in the endzone.

Red would break the 2nd half ice with a score from RB JaKel Brown early in the 4th. The conversion was good, giving the Red team a one-point edge, 7-0.

The White squad couldn’t get their offense going on the following drive, giving the ball back to the Red squad. White would need to force a stop to get the ball back for it’s offense, as time was running down in the 4th quarter.

With Red moving the ball down the field, the White defense would put up a big stand forcing and recovering a fumble. Kaleb Chestang would recover the ball with 3:25 left on game clock for the White team. This was huge as White looked to steal a late game victory.

The White team’s chances of stealing a win would abruptly dissipate, as DeShawn Smith would get a pick for the Red team on the very next play. This gave the Red team the ball back with 2:31 left on the game clock.