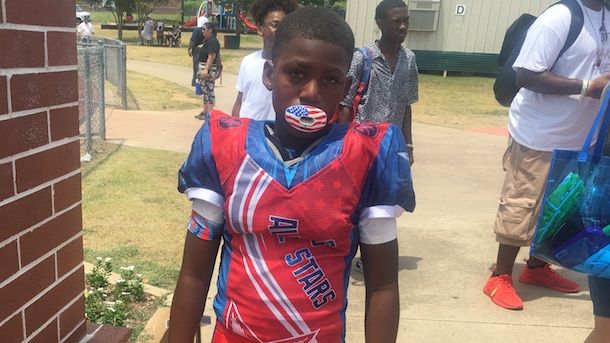 The 3rd grade game started gameday off right, in what was a defensive battle from start to finish.

The game started out slow for both team’s offenses. Each team struggled to generate any offense. The 1st half was a battle of the defenses, until the Red offense gained some traction late in the 1st half.

The White team would get the ball back late in the half and make a push toward getting on the scoreboard. Red team LB Karece Hoyt would quickly put an end to the White team’s late first half push as he sacked the QB who was trying to break free up the sideline.

Both teams were held scoreless as the game came to halftime. Both teams defense’s really shined in the 1st half. The Red and White teams would go into the half looking for ways to break loose the offense.

At the beginning of the 3rd quarter, the Red team’s defense remained tough to crack. On one of the White team’s first drives of the 2nd half, Red team DB Trenton Frankum made a tenacious tackle in the backfield to bring down White team’s running back for a loss. This play would result in a turnover on downs for the White team.

On the Red team’s next drive the offense would gain a bit of life thanks to RB Arieus Finley Jr.

On his first carry of the 2nd half, Finley Jr. would break off a beautiful 20 yard run, where he used his tackle breaking ability and juke moves to get downfield. This run got the Red team near the redzone. Finley Jr. followed up that run with another impressive run to keep things moving for the Red team.

The Red drive would eventual stall out. The score was 0-0 at the end of the 3rd.

During the 4th quarter the defensive trend would continue throughout.

At the end of the 4th, both teams were held without a score. OT would be a Kansas City Shootout, with each team getting the ball at the 10-yard line with a chance to score.

Both teams failed to convert in first OT.

The Red squad would pull out the victory in double OT as RB Michael Castillo darted through defenders to get into the endzone.