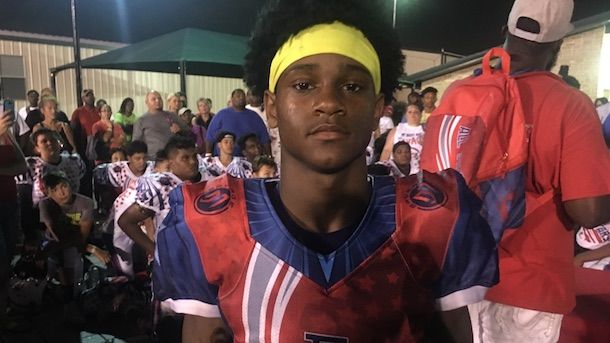 Led by RB Kaleb Miller, the Red team would play an impressive game from start to finish in what was a close contest.

After a slow to start to the game for both squads’ offenses, the Red team would get things going late in the 1st half.

RB Kaleb Miller broke free for 27-yard run to get the Red squad near the redzone.

He would quickly break the seal on the scoring for the game, as he showed great breakaway speed running up right sideline for a 60 yard TD with 3:45 left in the 1st half.

The White team didn’t have much going for them throughout the game. Midway through the 3rd, they’d make their first big play of the game as DB Jahsiah Galvan got an INT with 5:05 left in the 3rd quarter.

This put the White is scoring position, but they failed to capitalize.

Late in the game the White team would try to make a late push, but the Red defense proved to be too much as they deflected pass after pass. The ultimately would pressure and sack the QB to end the White team’s drive.

Kaleb Miller would put the game away for the Red squad with a blazing run up the right sideline, on what was an amazing show of speed. This put the Red team 2 yards away from the endzone.

They would score on the next play, making the score 12-2 as the 4th quarter came to a close.

RB Kaleb Miller would go to be named the Overall MVP of the game.