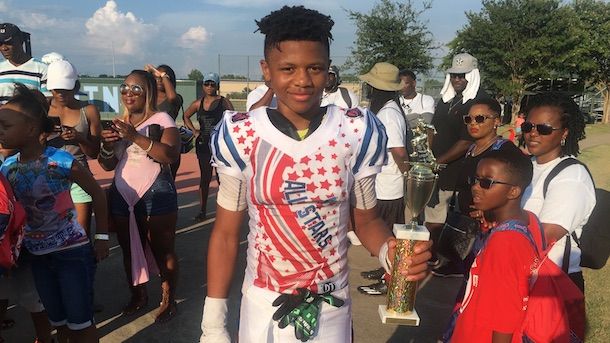 Led by stud RB Jaden Hart, the White team would rack up points en route to an impressive offensive display.

RB Cameron Bell helped make an early statement from the White team’s offense, as he broke loose for a smooth 15 yard run. He broke 3 tackles on his way to a first down.

Bell and Hart proved to be a lethal one-two punch all game long, as they both made impressive plays throughout the game.

Much of Hart’s damage was done through direct snaps from the Center. For his first score of the day Hart took a direct snap and scored on a 40 yard run, giving White a 6-0 lead in the 1st quarter.

The Red team’s offense really struggled to gain any traction throughout the game, especially during the first half. The White team’s defense stepped up to the challenge and had a remarkable performance.

The Red team failed to get anywhere on their next drive after the White defense forced a sack on 4th down. Red would turn the ball over on downs, setting the White team up in good field position.

The conversion was good, giving White a 13-0 lead at the end of the 1st quarter.

The 2nd quarter was more of the same for the White team offense.

Early in the second quarter Joseph Stephens of the White team made an impressive TD reception off of a tipped ball, giving White a 21-0 lead after a successful extra point kicked by Jaden Hart.

RB Ca’lil Valentine would get things going early in the 2nd half for the Red squad with an impressive run up the right sideline for 30 yards. This put the Red team in the redzone with opportunity to get on the board for the first time.

ATH Keidrick Richardson Jr. would quickly capitalize for the Red squad with a 12-yard TD scamper. This score came with 3:29 left on the clock, making the score 21-7.

The White team would quickly bounce back with two late scores to put the game away. They would roll to victory in a 35-7 lead.

RB Jaden Hart would go on to be named the Overall MVP of the game.