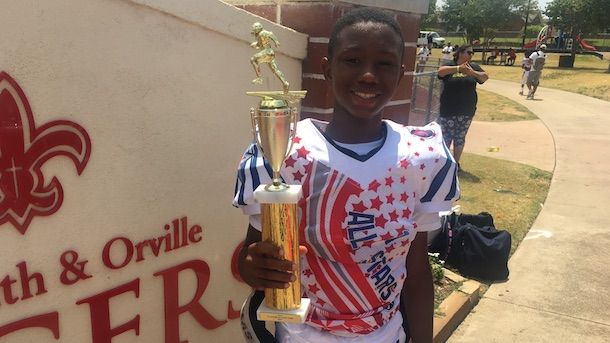 Led by QB Dequane Prevo, the 4th grade game would see the White squad completely dominate the game from start to finish.

QB Dequane Prevo would get things started during the 1st quarter for the White squad, with a 25 plus yard run up the left side. Prevo showed off his speed and ability to dodge defenders during this impressive run.

White’s offense would quickly put points up on the board.

As they push down the field on their first drive of the game, they’d get their first score on a run up the gut. This gave the White team a 6-0 lead. The conversion was no good.

Midway through the 2nd quarter, the White team would push to put more points on the board. Their impressive offense really took flight during this period. RB Kelwin Edwards broke free for a 77 yard run up right sideline to get White into the redzone.

Dequane Prevo would waste no time getting another score for the White team as he got loose on the left side of the formation to an easy touchdown run.

This gave the White team a 13-0 lead after the conversion was good.

Before the half, the Red team finally gained some traction on offense with an impressive 45 yard run, as the running back broke free of tacklers for a big gain. However, despite their late 1st half push the Red team was unable to get a score.

The White team would get another score late in the 1st half, which would ultimately be the last score of the game.

Dequane Prevo would cap off his stellar day running the ball with another impressive run to end the half for the White squad on a QB keeper. This gave White a 19-0 lead going into the half.

The Red team’s defense would play much better in the 2nd half, holding the White offense scoreless throughout the last half of play. The Red offense, however, failed to gain any traction throughout the game, as they posted zero points.

The game would end with a 19-0 victory for the White squad.