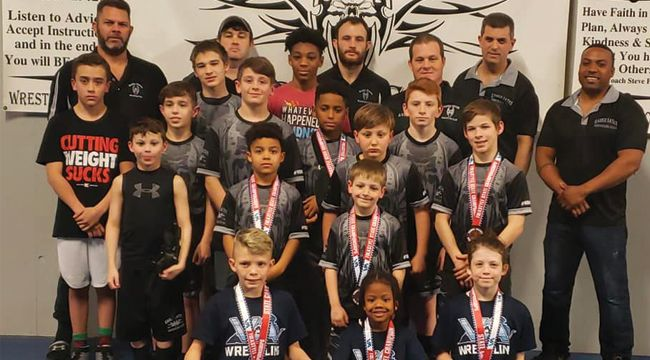 Virginia USA Wrestling hosted their annual Folkstyle State Championships this past weekend at the Arthur Ashe Center in Richmond, VA. The event saw more than 360 middle school wrestlers from across the state compete in this year’s event.

Leading the way was 77-pound Mason Knight of Virginia Patriots who posted a perfect 5-0 record. He won three of his five bouts by fall and used an 11-2 major Parker Withers of TYW to claim the bracket’s top spot.

Drew Roggie of Smithfield Wrestling won the 83-pound title by winning three of his five bouts by fall including his championship match where he defeated Luke Wells of Powhatan Youth Wrestling in :41 seconds.

Lane Foard of Team Cobra Wrestling dominated the 97-pound bracket as he went unscored upon during the event. He won his first match of the event by shutout major before rattling off three straight victories by fall. In the title bout he took on and defeated Anthony Lucchiani of Walker Wrestling by shutout decision 2-0.

In the 110-pound bracket it was Carson Main of Powerhouse Wrestling who pinned his way to the finals where he defeated Elijah Smoot of Team Cobra Wrestling 7-4. All four of his pins came via the first period.

Here is a look at the top place winners in each of the middle school brackets.