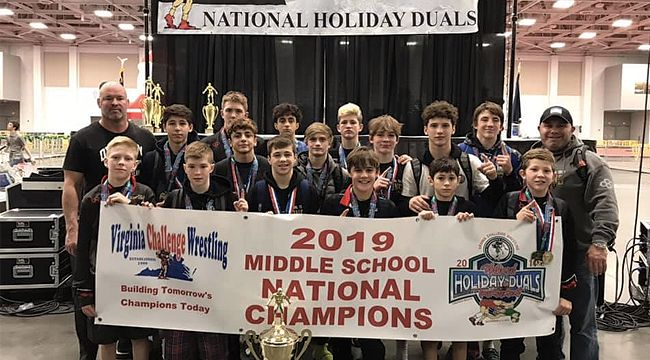 The Scorpions Dynasty DeathRow claimed the 2019 VAC Holiday National Dual Championship this past weekend as the team dominated the event by posting an impressive 9-1 record. The Scorpions team claimed the top spot when they avenged an earlier loss to PA Gold, as they defeated them in the title bout in thrilling come-from-behind fashion 28-26.

The NJ based team started the event on Friday by posting a perfect 3-0 record in Pool B as they pitched three straight shutouts. They won their first match vs Combat WC 87-0, then defeated Center Grove 73-0 before finishing the day with a 90-0 victory over Oklahoma Thunder.

On day two they picked up right where they left off as the defeated The Xtreme 59-7, The Academy 61-3, Kansas Marshall 52-9 and the Oklahoma Tornados 71-3. This set up a showdown with the other top undefeated team in their bracket in PA Gold. The team from Pennsylvania picked up key bonus points in four bouts as they won nine of the sixteen bouts to win the meet 36-21.

Both teams won their semifinal bouts which set up a much anticipated rematch with the championship trophy on the line.

PA Gold fought back as they would go on to win six of the next seven bouts. They secured wins from 96-pound Nikolaus O’Neill, 100-pound Kaedyn Williams, 110-pound Kamdyn Williams, 115-pound Luke Simcox, 120-pound Mason Gibson and 130-pound Nicholas Kunstek to take a 26-16 lead with three bouts to go.

Paul Ognissanti picked up a 5-2 decision in the 140-pound bracket and Daniel Magayna followed that up with a thrilling 2-0 sudden victory in the 160-pound bout that pulled the score within four with one match left.

It came down to 210-pound Koy Hopke who picked up a second period fall over Tucker Hogan to secure the 2019 VAC National Holiday Dual Championship for the ScorpionsDynasty DeathRow by a score of 28-26.