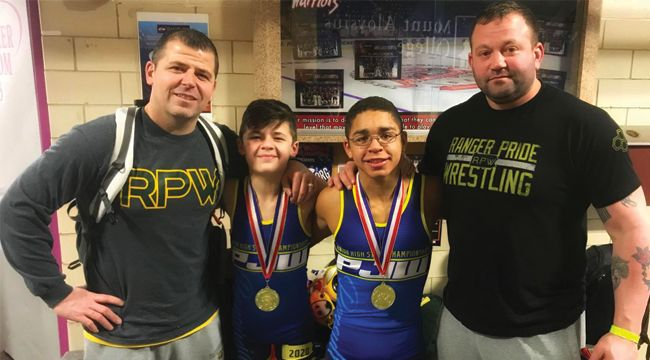 Leading the way was 92-pound Bo Bassett who won his sixth straight state championship. He won three of his five bouts by tech-fall and used a victory by fall in 2:38 over Andrew Binni to claim the 2020 championship.

In the 102-pound bracket it was Nikolas O’Neill who pulled an upset in the championship bout as he defeated defending state champion Devon Magro by major 9-0.

Finally Super 32 Champion Nick Kunstek claimed the 124-pound championship as he posted a perfect 5-0 record during the event. He claimed the title when he defeated Collin Gaj of Quakertown 6-0.

Here is a look at the top place winners in each of the junior high brackets.

Taking home the 77-pound championship was Ayden Smith of Dieruff who defeated Shane McFillin of Bethlehm 2-0. Tanner Mizenko of Canon-McMillan claimed the bronze with his 6-4 decision over Cater Beck of Saegertown.

Anthony Mutarrelli of Council Rock South posted a perfect 5-0 record as he claimed the 82-pound title. He won the gold when he defeated Luke Willochell of Latrobe in the title bout 2-0. Aaron Seidel of Northern Lebanon won six bouts after losing a match to win the bronze medal with a victory by fall in :43 seconds over Cole Hubert of Saucon Valley.

Nathan Desmond of Bethlehem dominated his bracket as he won one bout by shutout major, two by fall and two by tech-fall. He took home the title when he defeated Louie Gill of Hickory in the championship bout by tech-fall 17-2. Taking home the bronze was Davis Motyka of Wyoming Valley as he defeated Nico Fanella of Indiana 2-0.

Bo Bassett continued his strong season as he added a sixth straight state title to his resume. Bassett won three of his five bouts by tech-fall and took home the top spot when he defeated Andrew Binni of Canon-McMillan by fall in 2:38. He became one of only four wrestlers in the history of Pennsylvania to earn six state championships. Jason Torres of Coatesville wrestled back for the bronze as he defeated Landon Bainey of West Branch 3-0.

Dalton Perry of Central Mountain won the 97-pound championship when he defeated Maddox Shaw of West Jefferson Hills in double overtime 4-3. Wrestling back for the bronze was Gauge Botero of North Penn as he defeated Gavin Sherridan of Boyertown 8-0.

Nikolaus O’Neill continued his winning ways as he pinned his way to the finals before defeating defending state champion Devon Magro of Forest Hills in the title bout by shutout major 9-0. Cooper Hornack of Burrell won six straight matches in the consolation bracket to win the bronze with a 9-2 decision over Kaden Barnhhart of Blairsville.

Kollin Rath of Pleasant Valley claimed the 107-pound title when he defeated Isaac McGregor of Waynesboro 9-1. Claiming the bronze medal was Kaedyn Williams of Manheim Township who defeated Gunnar Myers of Wallenpaupack 6-2.

Winning the 112-pound bracket was Kamdyn Williams of Manheim Township as he defeated Nathan Rickards of Owen J. Roberts in the championship match 6-4. Wrestling back for third was Blake Reihner of Trinity who defeated Mason Barvitskie of Southern Columbia 1-0.

Mason Gibson of Forest Hills won the 117-pound championship with a 3-1 decision over Lukee Simcox of Central Mountain. This was his fourth consecutive state title.  Wrestling back to win the bronze was Julian Everitt of Wyoming Valley Wrestling as he defeated Cameron Milheim of Warrior Run in the consolation finals 3-2.

Nick Kunstek of Pottsville added a state title to his resume this past weekend as he posted a perfect 5-0 record. He took on and defeated Collin Gaj of Quakertown 6-0 to win the 124-pound championship. Wrestling back for third was Luke Sipes of Altoona as he defeated Lonzy Vielma of Connellsville 3-0 in the consolation finals.

Winning the 132-pound title was Conner Harer of Muncy as he defeated Ryan Garvick of Central Dauphin in the finals 2-1. Charlie Scanlon of Bethlehem won six straight bouts in the consolation bracket to win the bronze with a 10-6 decision over Cole Bartram of Northern York.

Rune Lawrence of Frazier claimed the 157-pound title when he defeated Ryan McMillan of Wilson Southern by major 13-0. Caleb Marzolino of Abington Heights won the bronze with a 10-4 decision over Aaron Bowers of Northern Bedford.

Taking home the 167-pound championship was Tucker Hogan of Daniel Boon. Hogan posted a perfect 5-0 record which included his victory by fall in :47 seconds over Nichola Pavlechko in the title bout. Tucker Paynter of Big Spring won the bronze when he defeated Frankie Macioce of Plum 5-2.

Beau Azzato of St. Mary’s won the 187-pound championship when he defeated Daniel Haubert of Palisades 5-4. Wrestling back for the bronze was John Padro of Kennett who defeated TJ Border of Seneca Valley 5-3.

Sean Kinney of East Stroudsburg put on a dominating performance as he pinned his way to the final. He then used a 4-0 shutout over Joseph Enick of Penn Tafford to win the championship bout. Joseph Baronick of Burgettstown won the consolation title with a 3-2 decision over Andrew Semmel of Kennett.