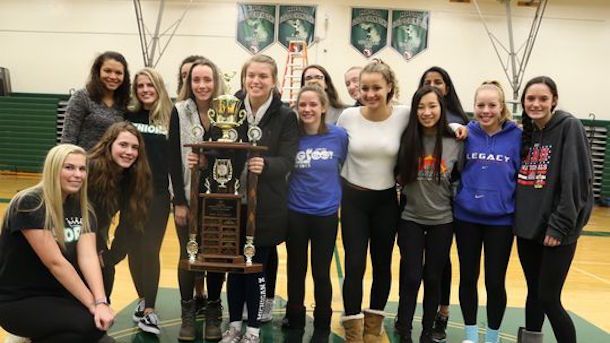 Brad Emons originally wrote this article. The full article and others like it can be found on the following website: http://www.hometownlife.com/story/sports/high-school/novi/2017/11/13/novis-oleary-brings-home-miss-volleyball-award/859609001/

"I really didn't know what was going on," said the All-State senior setter of the two-time defending Class A champion girls volleyball team. "I figured I wasn't in trouble. I'm not really a troublemaker, but I did feel a little anxious about something going wrong, I don't know . . . maybe a test or something. I wasn't sure. Since I've been a good student and I enjoyed high school she (Carter) wanted to hear how it's been going what's been done to make it good."

It turned out to be a well kept secret from the 4.2 student headed to the University of Michigan, who after her senior exit interview, was ushered down the hallway and into the performance gymnasium by principal Nicole Carter.

And before a throng of her fellow senior students who were perched in the bleachers, O'Leary was announced as the 2017 Michigan Miss Volleyball award winner.

Needless to say, O'Leary was shocked by what happened. And it was all good.

"Then I walked in here and saw all these people . . . they told everyone it was going to be our class picture," O'Leary said, "so we were all matching and everybody was wearing black shirts, but now, I guess, it was because of me. I had absolutely no idea."

One of 10 nominees for the award, O'Leary won by a comfortable margin garnering 212 points in the voting by the Michigan Interscholastic Volleyball Coaches Association (MIVCA).

New Baltimore Anchor Bay's Maria Mallon, headed to the University of Cincinnati, was runner-up with 109.

"This not something that I would have anticipated," said Colleen O'Leary, Erin's mother. "She's not the kid that this is what she's worked for either. I think her biggest focus is still making it to Saturday. So this will be a moment that is a wonderful honor, but Saturday is probably hoping to be a big focus for her if we can get there."

Novi, sporting a 54-3 overall record, is gunning for its third straight Class A title heading into a Tuesday quarterfinal matchup against Temperance Bedford, one of only three teams to beat the Wildcats this season. The winner will advance to the state semifinals Thursday at Battle Creek's Kellogg Arena.

"This is the week we've all been waiting for, I think," Erin said. "You stay focused on the moment and whatever game is next, but it's hard not think about those last few games. This had been super cool, but it's game day, so . . . "

A four-year varsity performer, O’Leary is the state’s all-time leader with 5,678 assists, becoming just the third player in Michigan history to record 5,000 assists in her career.

O’Leary was named the 2016 Gatorade Player of the Year in Michigan, and recently named Under Armour First-Team All American. She is a two-time MaxPreps First-Team All American and was a member of the USA Volleyball Girls’ Youth National Team, which placed runner-up at the 2016 North, Central American and Caribbean Volleyball Confederation (NORCECA) Girls’ U18 Continental Championship.

She became the fourth Novi senior recognized as the state’s top player in his or her sport, joining Mr. Tennis Tim Wang (2014), and Miss Soccer Emily Esbrook (2006) and Kristi Timar (2005).

"I don't know if there's a more deserving player in the state than her and what she's accomplished in her four years at Novi," Novi coach Jen Cottrill said. "It's her intangibles and her leadership, citizenship, her grades, her discipline . . . not that there aren't other deserving candidates on the the list, but her resumè is very impressive."

The 6-foot-1 Cannon, meanwhile, took fourth in the voting.

"I think those two kind of go together," Cottrill said of O'Leary and Cannon. "They help each other out. Abryanna is a great passer, who allows Erin to deliver great sets. And obviously Abryanna terminates. I feel kind of like they're a team within a team between the two of them. And she's also a tremendous player. Obviously not being at Novi her entire career probably hurt her a little bit. Erin's reputation and her success from her freshman to senior year has spoken for itself."

O'Leary, who played club volleyball for Legacy, verbally committed to the Wolverines during the summer following her freshman season.

Michigan head coach Mark Rosen and his wife Leisa, a U-M assistant coach, were also on hand for the surprise ceremony.

"We've known Erin forever, she was a ball shagger in our gym when she was really young and she played in our club," Mark Rosen said. "She's just such a good all-around volleyball player, such a good decision maker. Her athletic ability is a huge factor, but she's just such a great volleyball mind. So we're excited about her coming to our program and bringing that high volleyball I.Q. And she's just a character kid who has all those intangibles you look for in a student-athlete, so we're excited about her being in the Maize and Blue."

O'Leary is scheduled to graduate a semester early and enroll at U-M in January.

"We're still working through admissions," Rosen said. "It's a process were involved in, but not something we have control over. That's the plan, so we'll see how it all comes together."

"With her freshman class they'll all be on the trip," Rosen said. "She's the first person actually to come in early. And it's not something we're promoting or looking for. She came to us with the idea that academically she really wanted to get started. She's a great student and I think it was a priority for her to kind of get her college classes going. We're excited about it, but it's not something we pushed for that or something for that in the future."

At an early age, Erin gravitated toward volleyball even though her father Brian, a math teacher at Novi, was a soccer coach who guided the Wildcats to five MHSAA girls championships and one boys title in his 20 seasons.

"We were coaching her sister (Abby) fourth grade and she would go to practices and be part of all the time," Colleen O'Leary said. "Most first graders haven't touched a volleyball."

Erin has never had her father for a class, but her older brother Connor once did. And like her mother, Colleen, Brian is a big supporter.

"I love seeing him around school," Erin said. "I know he's a good teacher and kids like him. It's fun to be his daughter at the school. I owe my parents so much. They do so much for me that I can't even begin to explain . . . "

Once the trophy was presented by Novi athletic director Brian Gordon, O'Leary was hugged by her teammates, classmates and school personnel.

"Novi schools have been the perfect place for me to grow up," Erin O'Leary said. "And for sure I'm going to miss my friends and my teachers, and this whole thing. It's bittersweet for sure."

O'Leary still couldn't get over the unexpected visit with Carter.

"What I created today was a senior exit interview because as you know she's starting at the University of Michigan in January, so I took her through a series of questions," the Novi principal said. "We had an awesome conversation and then I got the thumbs-up from my secretary, so I knew that was the symbol to bring her down and she was in complete shock, which was awesome. Well deserved honor for a great, great young lady."

This article first appeared on http://www.hometownlife.com/story/sports/high-school/novi/2017/11/13/novis-oleary-brings-home-miss-volleyball-award/859609001/, one of Youth1's sources for Volleyball articles. To submit your site for consideration for Youth1 syndication, please email Laura Petrillo at lpetrillo@youth1.com.

Jasmine Middleton 3 years ago
next page?