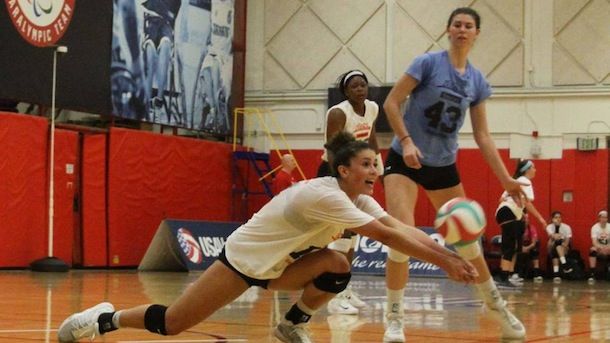 Perhaps the most discussed topic on the Facebook group “Volleyball Coaches and Trainers” is the exasperation of coaches who see their players, mostly younger ones, not “move their feet” on serve reception, defense or team systems in general.

The players are not sure where to move to meet the oncoming ball, in large part because too many coaches drill in ways to make practice “look good.” Instead, in practice coaches should play the imperfect realities that happen in competition at every level of the game. If our U.S. Women’s National Team is out of system 48 percent of the time in games, with as much experience and training as they have, what do you think the reality will be percentage wise for your 13U team?

Let me give you some examples. See if you can find your teaching/coaching style below. This is based on the book about John Wooden titled “You Haven’t Taught Them if They Haven’t Learned.” Do you do any of the following?

You let your players fly under the net after they spike in your hitting drill. Then, you require your athletes to do “transition off the net” drills since they stand at the net after being blocked and don’t quickly move off to hit again.

You yell, “O.K., serve!” You watch your players serve and admire their serves rather than running to defense. Then, you bemoan and admonish a player in a match when the opponent’s serve drops into where your player should have been. So, you punish the player or whole team with the running of sprints or lines.

You teach players blocking by having them stand on a box, even hitting at them yourself. Then, you get frustrated when your blockers don’t know how to be at the right place and time to block a live, moving hitter.

You teach the setter to read your nearly perfect throws to the setter spot without ever moving the ball cart. Then, you are baffled when your setter can’t read a serve receiver or set the 90 percent of the balls arriving outside the pass target.

You teach “shadow blocking” for a warmup/footwork drill, letting the whole team move down and along the net in pairs blocking each other. Then, you get upset when your players are blocking in the wrong place (directly in front of the other player), at the wrong time (jumping at the same time as the opponent on the other side of the net), or they net fault (rather than be pushed back/kept off the net by the other shadow blocking teammate).

You let your players pair pass and/or pepper for 10-20 percent of practice on the same side of the net. Then, you punish them for not moving their feet on the 100 percent of the serves and spikes that come from over the net.

Amazingly, a common place the coach “teaches” is in between the sets of a match or at a match’s end, by making the team run lines, do pushups, or some other form of punishment. This wastes valuable learning time in the belief that it will thus “teach movement.” That the players are not moving means they are not reading in time.

The frustrating part to me as a teacher of coaches is that those players who perform below their norm or fail to move well, who then are punished also then regress to their mean and play better, and then the coach believes that it is the punishment that worked. Sadly, they are being fooled by regression to the mean, and thus are not teaching as effectively as they could be by trusting their players and guiding their discovery and game play reading.

That your players will enter the season guaranteed to play 50 percent of the time below their average means that some days they will be moving great and other days not so well. It is not caused by staying up late or not caring about moving. The examples above show how the most likely cause is the false confidence being instilled by nonreality-based drilling. It also simply happens because some days you are the windshield and some days you are the bug. On any given Sunday any NFL team can win, even over the best team in the league.

To get John Kessel's tips on how to improve your player's footwork, read the full article at teamusa.org.