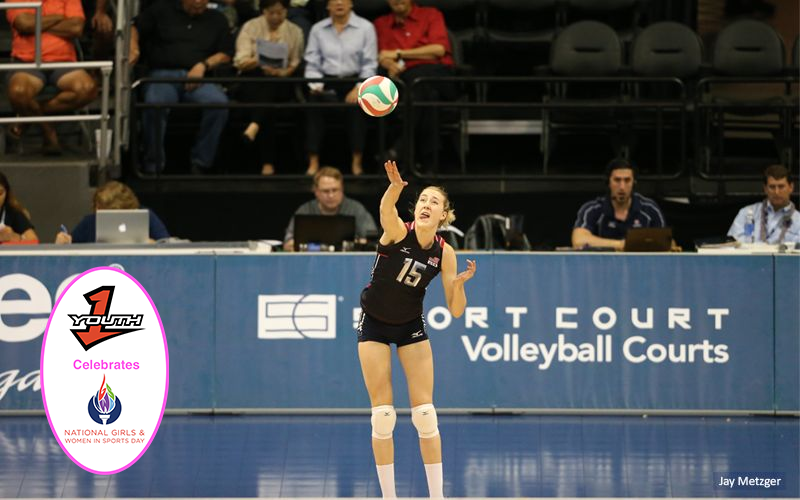 “Since serving is the only skill in volleyball that we have complete control over from beginning to end, a lot of people want to talk about (pre-serve) routine – bouncing it three times or whatever – but that’s not really the place you should start. The place you should start is contact. That’s where the rubber meets the road. You’ve got to learn how to hit the ball well and hit it consistently. You want a flat, tight hand. Make contact with the middle of your hand, and hit the middle of the ball. Once you’ve gotten good at that, then you can work on some range – different directions, different trajectories, different distances. And then you can work on your routine. But if you start players with the routine and forget about contact and range, they may have the greatest routine ever, but then they’ll be hitting the ball with their thumb or another part of their hand, and they won’t be very good servers. If you make good contact, you can have some inefficiencies in other places and still be a good server.”

April Ross
Olympic beach silver medalist (2012), three-time AVP Most Valuable Player, FIVB Best Server 2011, 2012, 2015
“One big key to a great beach jump float is to hit the ball into the wind to make it move as much as possible. It might be a headwind or a side-to-side wind. If it’s side to side and the wind is blowing right to left across the court, serve from the left to the right. If it’s a left to right wind, serve right to left. Just like indoor, you want to get a hard pop on the ball with a flat hand. The more pop, the more it will move. Another big key on the beach is depth deception. If you can get the ball to either drop or to stay up longer, that’s ideal. To go deeper, follow through a bit more with your arm swing. To go short, stop your arm on contact. Your footwork for a beach jump float is essentially the same as indoor, but you shouldn’t jump quite as far into the court because the beach court is shorter. You don’t want to have too much body momentum behind the ball. Instead, jump more straight up and down and rely mostly on the speed of your arm swing to control the ball.”

John Speraw
Head coach, U.S. Men’s National Team, UCLA men’s team
“When your coach tells you to go with the jump float, it shouldn’t bruise your ego. This isn’t an ego check. This is about playing a game with variety. Some days your jump serve may not be there or your opponents may not be passing the float very well or your teammates might be erring at a really high rate and you need to go with a less complex skill that’s a higher percentage. It’s not about your ego. It’s about a way to win. You also have to understand that a jump float is just as effective a weapon as a jump spin. One of our top serving scorers on the U.S. team is David Lee with his jump float. So you need to train this serve with the same seriousness as the jump spin. Continue to be aggressive. Just because you’re going with the jump float doesn’t mean you should pop in an easy serve. It’s a less complex skill and the error rate will go down, but that doesn’t mean you’re taking it easy. Make sure you’re hitting the ball hard, where you want it and an error rate that’s lower than 10 percent.”

Karch Kiraly
Head coach, U.S. Women’s National Team, three-time Olympic gold medalist
“Players should learn what a good jump float serve looks like. There are two key characteristics. One is that it doesn’t cross the net by very much – a foot or two at the most. If it crosses the net much higher, then it’s a lot easier to pass because it’s got a lot more arc in its trajectory. The flat serve gives passers the least amount of time to react, and it puts them on the defensive. The other key characteristic of any good float serve – and you can see it just by watching USA or watching a good college team – is that it doesn’t have spin. It’s like a knuckleball in baseball. So you put those two things together, and it’s very obvious to most players that a good float serve is flat and clean. We call it “flean.” Players should experiment to see what they can do to achieve a result that is flat and clean.”

Kim Hill
Outside hitter, U.S. Women’s National Team, 2014 FIVB World Championship MVP
“For me, the toss is really critical in mastering a jump float. I try to focus on tossing the ball high enough and far enough in front of me. Then I am able to put myself into a good position to contact the ball, which is probably the most important part of the jump float. It doesn’t matter if you’re 6-11 or 4-11; if you have a good contact and get the ball to move, you can get your opponents into some serious trouble.”