Youth sports are continuously evolvoing and becoming more serious each year. The more serious they become, the bigger impact they have on the children who play them. It is a parents responsiblity to make sure their children understand what is really important while playing these sports. The best way to do this is lead by example and be a positive role model. Here are some ways a parent can be helpful and ultimately encourage their children involved in youth sports.

A Parent's Greatest Strength And Weakness

It is no easy task to be a parent of a young athlete. Hard enough are the tasks of helping the child learn how to handle the ups and downs of competition. But perhaps most challenging are the demands on your own coping skills - learning how to manage emotions that are repeatedly tested under trying conditions.

As a parent, you experience a rush of positive emotions when your child triumphs, a deflating sense of emptiness when they lose. This emotional process can almost become addicting. Instead of focusing on the child’s goals, you can get caught up in seeking more experiences where you can feel that rush of positive emotions. You can begin to focus on your own fantasies for your child - fantasies of success, fame, and recognition.

A common problem is that your love of your child may lead you to behave in ways that ultimately hurt the child’s development, or hurt their relationship with you. The paradox of being a parent is that the good reasons we have for pushing our children to succeed can, at the same time, lead to behaviors that teach our children to be selfish and grasping instead. A parent’s greatest strength - their unwavering emotional support of their child and their willingness to make sacrifices for their child’s athletic advancement - is thus also their greatest weakness. 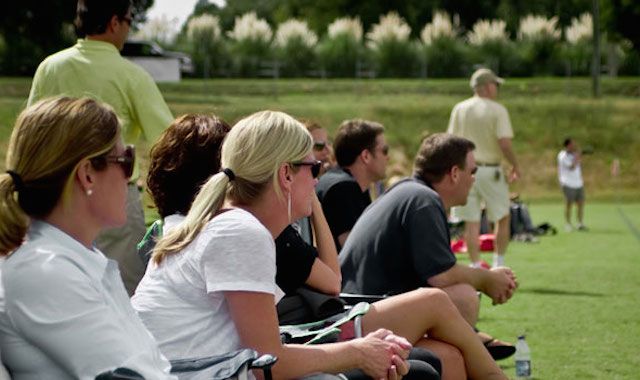 Unfortunately, parents get caught in this trap all the time. It shows itself in the following ways:

The Positive Versus The Dark Side

Watching parents who do a great job of supporting their child’s development in sports, and watching those who fall into the trap of pushing their child beyond the limits, I have seen that the difference between them is whether they can put their own desires aside (Dark Side) and focus on what their child wants (Positive Side).

Here are some specific examples of ways in which parents can cross the line between positive and negative in supporting a child athlete:

All too often, parents feel justified in acting in ways that their child and others perceive as controlling, negative, or confrontational. It is indeed a paradox. The question is, is there any way out of it?

To begin with, I don’t believe that there is any way to avoid the emotional pressure that parents feel when they support their young athlete. As your child moves up the competitive ladder, this pressure naturally increases. You will always be tempted to step over the fine line between providing encouragement, constructive criticism and being a role model and becoming an over-involved, pushy and emotionally, and worse yet, physically abusive parent.

But I do believe that parents can learn to change their behavior, so that they do not give in to the emotional pressure they feel, but choose instead to act in a mature and responsible manner, to develop the skills to deal with the pressure and learn to pass those skills on to their child.

Over the course of more than a decade in youth sports, I have observed that some parents have broken the mold and managed to escape the clutches of the youth sports parent trap. These parents typically display the following behavior:

Instead of behaving in the expected way, the parents who exhibit these behaviors act in way unexpected and surprising. The results? More fun at games, more friendships among other parents, and respect from coaches and officials.