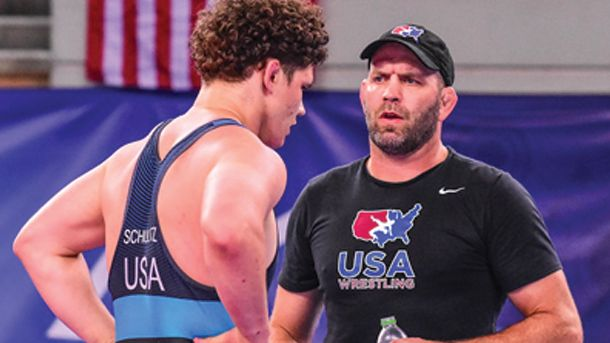 The U.S. Cadet World Teams will compete in the Cadet World Championships next week in Zagreb, Croatia, and will be led by a talented group of coaches.

The head of the men’s freestyle team is one of the greatest American wrestlers in history and the National Freestyle Developmental Coach Kevin Jackson.

Jackson has garnered countless achievements as an athlete and coach. Most notably, during his athletic career, Jackson was the 1992 Olympic champion and a two-time World champion, winning gold in both 1991 and 1995.

Assisting him are a pair of NCAA Division I assistant coaches in Lee Pritts and Kellen Russell.

The women’s freestyle team will be led by U.S. National Women’s Freestyle Assistant Coach Emma Randall, who has been on staff with USA Wrestling since 2012. She’ll be making her third-consecutive trip to Cadet Worlds as a coach.

She has been on several World Team staffs, including the 2017 Cadet, U23 and Senior World Teams. In last year’s run, she saw the U.S. women win seven World medals which included two silver medals in the Cadet divisions.

As an athlete, Randall competed for Lock Haven University as the only female on the team. On the national scene, she was a 2010 World Team Trials qualifier and earned All-American honors at the 2010 U.S. Open.

Leading the Cadet Greco-Roman World Team is USA Wrestling Manager of Greco-Roman Programs Gary Mayabb, whose position focuses on improving USA Wrestling’s performance in Greco-Roman wrestling at all levels while growing the sport in the United States.

Mayabb will be assisted by Lucas Steldt and Mark Rial.

The Cadet World Championships begin on Monday, July 2, in Zagreb, Croatia, at 10:30 a.m. local time (4:30 a.m. ET). Fans can watch all the action live on Trackwrestling.com.

Ryan Lance 3 years ago
next page?

Hunter Roberts
Wrestling | 144
Get your profile