Each year, the Super 32, annually features some of the top up and coming youth wrestling talent. This year will be no different as a number of the top youth wrestlers in the country will compete for the prestigious Super 32 Championship Belt this weekend at the Greensboro Coliseum in Greensboro, North Carolina. Below, we take a look at some of the top wrestlers registered in each weight class and give you a little insight on what to expect this weekend in Greensboro. 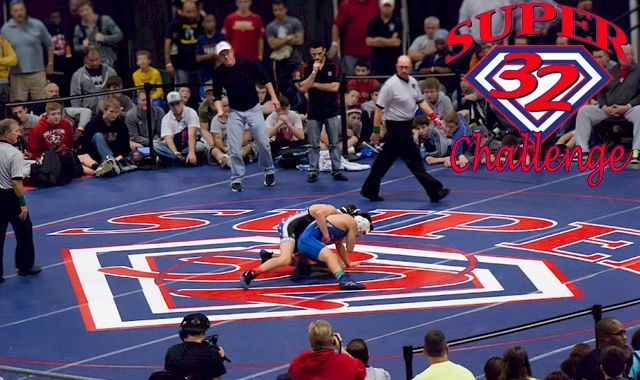 USA Wrestling Preseason National Champion Kellyn March will lead the 80-pound bracket as he’ll look to capture his second straight major championship this weekend. In order to do so he’ll have to get past the likes of New Jersey’s Nico Nardone, Ohio State Champion Cole Skinner, California’s Richard Figueroa, and Gable Strickland from Pennsylvania.

85-pounds
Adam Allard from Iowa will look to win his second major event of the new season. Allard took home the 91-pound USA Wrestling Preseason National title this past weekend and will look to do it again this weekend in Greenboro. Joining him in the 85-pound bracket will be Michigan State Champion Andrew Chambal, Ohio’s Garret Donahue, Georgia State Champion Caden McCrary, and Pennsylvania standout Kurt Phipps. Another one to keep an eye on is New Jersey State Champion Dean Peterson and Colorado State Champion Wyatt Yapoujian.

100-pounds
Carson Manville from Virginia will be the odds on favorite to win the 100-pound title. This past weekend he captured the USA Wrestling Preseason National Championship and will look to add the Super 32 title to his resume this coming weekend. Regarded as one of the top youth wrestlers in the country, Manville will have to get past Nicholas Masters from Georgia, Trevor Mastrogiovanni from New Jersey and Illinois State Champion James Pierandozzi.

Other wrestlers to keep an eye on are Carlos Negrete Jr. from California and Caden Natale from Michigan.

105-pounds
Sincere Bailey from Illinois will look to win his second title of the season as he already owns a Grappler Fall Classic Championship. This past weekend Bailey brought home a second place finish at the Preseason Nationals and will work to win a championship belt this weekend in North Carolina. He’ll have to battle past Manzona Bryant IV from Ohio, Virginia State Champion Evan Buchanan, New Jersey's Travis Mastrogiovanni, and Patrick Noonan from Pennsylvania.

112-pounds
A pair of Pennsylvania standouts will lead the 112-pound weight class as Sam Hillegas and Connor Kievman will lead a talented field of 112-pound wrestlers. Hillegas is a two-time Super 32 Champion and will look to join Cade Olivas as the only other youth wrestler to win the event three times in a row. He'll also have to battle past Colby Schriever, Josh Epperly, and Francis Morrissey.

120-pounds
Beau Bartlett will look to avenge his second place finish in last year's event as he'll compete in the 120-pound bracket. One of the top youth wrestlers in the country, Bartlett already has a Preseason National title under his belt. Joining him in the bracket will be California State Champion Jose Fernandez, Nick Alejandro from Pennsylvania, Andrew Shaffer from Ohio, and Cole Spencer from Pennsylvania.

128-pounds
Looking to improve upon his 3rd place finish from a season ago will be Dustin Plott from Oklahoma. Plott will be joined by Preseason National Champion Austin Boone from Michigan, Max Shaw from Pennsylvania, and Alec Baynard from North Carolina.

136-pounds
Competing in the 136-pound weight class will be Aaron Bancroft from North Carolina, Tracey Hunter from California, and Nikko Martini from Pennsylvania. Others to keep an eye on include Frankie Talsharar from Florida and Mason Winner from Indiana.

145-pounds
Gerrit Nijenhuis from Pennsylvania will look to improve upon his 4th place finish in last year's Super 32 as he'll compete in the 145-pound weight class this weekend. He could make a deep run in the event if he can get past Brett McIntosh from Ohio, BJ Bailey from Illinois, and Jadon Martin from California.

157-pounds
Five wrestlers will compete in the 157-pound bracket as Andy Aldridge from Virginia, Kyle Cline from Georgia, Landon Foor from North Carolina, Bradley Goodwin from Tennessee, and Braxton Parks from Michigan will all compete for the belt.

180-pounds
As of this publishing, only one competitor is registered for the 180-pound weight class in Wil Marrow from Ohio.

235-pounds
Braxton Amos from West Virginia will be the favorite to win the 235-pound weight class as he'll have to outlast Chase Barnes from South Carolina, Patrick Ganter New York and Jacob Padilla from Ohio.

The action will be nothing short of spectacular all weekend long and we'll be brining you updates throughout the weekend. Be sure to stay tuned to Youth1.com for a complete recap and a list of Preseason All-Americans next week!

Ryan Lance 5 years ago
next page?