(Youth1 Hockey) - Traditions have such an impact on people because it reflects our past and it brings a sense of comfort knowing itâs happening again. Sports fans are going to love this countdown of the top 10 classic sports traditions that have been around for years, and arenât going anywhere anytime soon.

As we discussed in last weekâs top 10, The Star Spangled Banner, is one song you love to hear when youâre at a sporting event. Itâs such a worthy tradition in the sporting world that it deserves another spot in the top 10.  The tradition first originated during WWI and got great reactions from the crowd, all who were supporting their friends and loved ones fighting for our country during that time.  Sporting events bring all kinds of people together and create wonderful memories that live on for years, and itâs such an admirable gesture to recognize those who lost their lives for us that make moments like that only possible because of them and their selfless acts.

What says sportsmanship better than shaking hands with the opposing team after a long, grueling game when both teams are trying to come out victorious? Thatâs how the NHL does it, and it aims to set a good example of love and respect for the game, also displays sportsmanship to the max. Now, in many if not all youth sports after each game whether its baseball, football, hockey, etc all the kids get lined up after a game and shake hands, usually also saying âgood gameâ while passing.  Winning is such a rewarding feeling after playing your heart out, but there needs to be a loser in every game thatâs played and with the handshakes afterward the tradition strives to put a positive message towards all kids involved in sports while growing up.

Former players, celebrities, and even presidents have been part of this well-loved tradition throughout baseball history. Crowds around the world love baseball season so this moment isnât to be taken lightly, because after that pitch is thrown their favorite time of year has officially begun and itâs such an exciting and enjoyable time for fans all around. There have been some pretty wacky throws throughout the history of this tradition but it doesnât matter, everyone gets a kick seeing the first pitch being thrown. Whether itâs right down the middle, or thirty feet off the crowd cheers them on regardless, enjoying the moment before the big game! 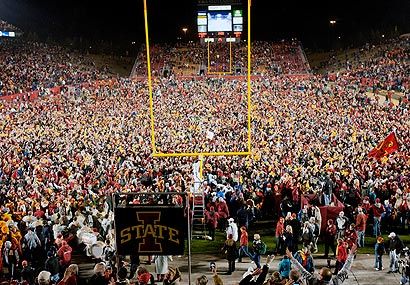 This gears more towards High school & college sports teams. Trying to rush the field in any pro sport youâre probably going to get in quite some trouble. However for college & high school sporting events, for years after a big win crowds run off the bleachers onto the court/field cheering and celebrating the win. Itâs such a rewarding moment for the players and fans to see the team, who play not for money, but just for the love of the game being able to come out victorious. The pride the fans have for their team is quite evident and itâs definitely a moment that will never be forgotten for anyone involved.

This hairy tradition started back in 1980 and has made quite a journey since. Itâs simple; once a team enters the playoffâs they do not shave their beard until they get to the end and win it all, or unfortunately lose. Many players get involved in this tradition, and whatâs even more humorous is that even fans can join their favorite team by supporting their journey by not shaving their beards either.  Majority of this takes place within the NHL but there are a few occasions with baseball, football, and even basketball where certain players followed the no shave rule. âPlayoff Beardâ took such a positive turn and even found its way to start making money for charity titled âBeard-A-Thonâ. It has raised over a million dollars since and still continues to this day.

This is another great example of sportsmanship on and off the court throughout the history of soccer.  Many players feel itâs a way to show respect for the coaches, other players, and most importantly the game. While playing there is an obvious rival between teams who are facing against one another with no boundaries, all hungry for a win. However, as stated previously there always needs to be a winner, and there always needs to be a loser. The Jersey swap is a peaceful way to show that after the game, win or lose the players are back to being friends and accept the outcome. Itâs a fun tradition that fans look forward too. Trading one sweaty jersey for another is just a soccer playerâs way of saying âgood gameâ and fans and players wouldnât have it any other way. 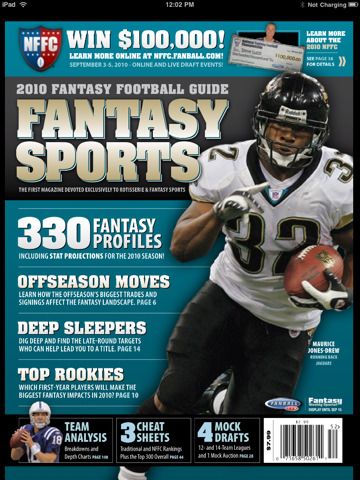 A little different then rest on this list, however Fantasy Leagues have been around since the 1950âs and it wasnât really until around the 1990âs  thanks to new technology that it really took off.  It allows fans to act as a manager; they collect players and due to their skill and points it determines if they win or lose the league. Sports are already a great event to watch and be a part of, but with fantasy leagues it takes it to a whole other level. One thing is for sure, Fantasy Leagues arenât going anywhere anytime soon, in fact they keep growing and upgrading making it more easy, fun, and definitely more addicting to sport lovers! Come one, when thereâs a way to get multiple all star players from different teams, on YOUR team how can it not be? 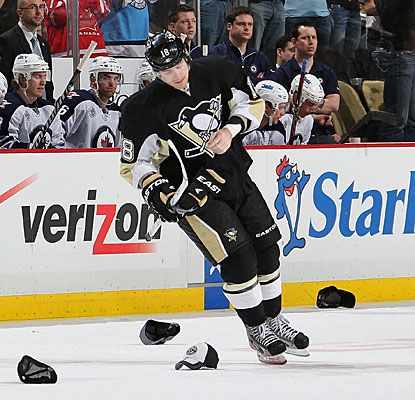 A tradition that definitely unites fans & players. A hat trick in hockey is when a player scores three goals in a game, a definite achievement in such a competitive sport. The way fans celebrate such an exciting moment in the game, besides cheering loudly is throwing hats onto the ice. . Itâs an accomplishment that deserves more than just cheers from the stands, so with much love and appreciation from the fans hats come pouring onto the ice while the player is able to soak up the glorious moment of achieving such an exceptional task. So nfans next time you head to rink remember to bring an extra hat because you donât want to miss out on your chance to be a part of this wonderful tradition. 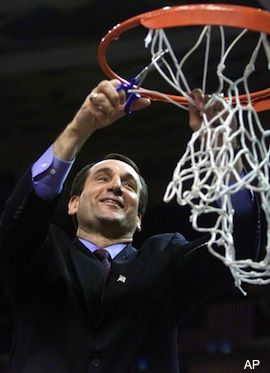 This tradition goes all the way back to the 1920âs during a college basketball game where the first net was cut down, symbolizing winning the championship. The tradition is still practiced today,  and itâs a known fact that whoever wins, gets that special moment cutting it down, knowing that net will be framed and hung proudly for all to see. In that moment itâs not just a net that is used to play basketball itâs the one thing that mattered the most during that game.  That net represents the time, dedication, blood, sweat & tears the team put into the game that year and most importantly that they WON it all! 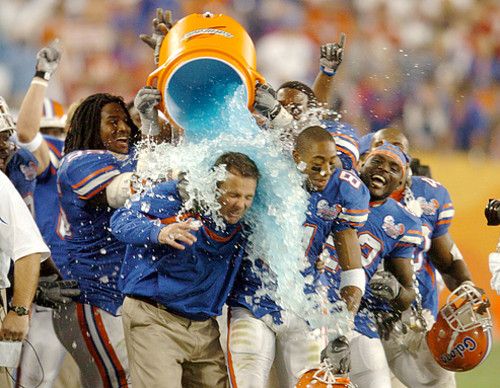 One of the coolest traditions yet, and when I say cool I mean it.  The Gatorade bath is just as it sounds, after an important game the head coach or key player gets a cooler filled with ice and Gatorade dumped on his head during the celebration. It began with the New York Giants back in the 80âs and everyone LOVED it, well maybe everyone besides the freezing wet coach. Majority of the baths take place after a team wins the Superbowl. It makes an unforgettable moment, all the better. The best, in my opinion, is when the players sneak up on the coach and get him when he isnât expecting it. It makes for a wonderful picture, and when looking back players, fans,& even the coach canât help but grin remember that exact moment.