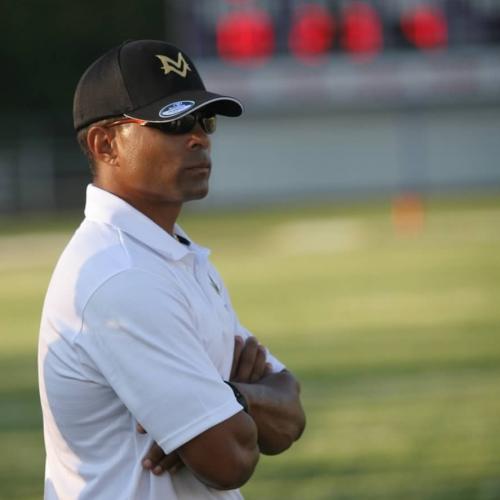 My name is Marcus Cole and I am currently Head Coach of Team Indiana Football. I have a Masters Degree in Education and another in Psychology. I use this in every aspect of my personal, professional, and educational life. I employ many tactics to motivate, inspire, and further promote players to achieve goals that may be above and beyond their own expectations. I started playing youth football in Indianapolis Indiana for Tabernacle (Tab) and basically fell in love with the sport. I was not the biggest, fastest, or strongest player at any level, but was able to perform at a high level because of my knowledge of the game. This knowledge allowed me to get to spots, anticipate, and control the opposition with my mind as a driving force. I was most valuable player at Bloomington High School South in Bloomington Indiana my senior year. During high school I had the priveledge of playing for two hall of fame coaches. Coach Enright and Coach Moriarity. Both of these legendary Indiana High School football coaching legends believed in my abilities and gave an undersized running back a chance to run the ball. I made the most of my opportunities and held down my position by outworking every contender.

After High School I could have played some D3 ball,  but even though I was a glutten for punishment, I decided to go to college and get a job instead. When I was 21 I had gained some weight, packed on a ton more muscle, and joined a Semi-Pro Football Team for 3 seasons as a defensive back and slot back. I then started coaching at a youth organization and won my first championship at any level,  as a coach! Years went by and I had moved to Florida and then back again to Indiana. This is where my coaching passion really started to manifest. My oldest son was 7 years old and my youngest just turned 5 and they started playing in I-9 Sports (Flag Football). I was just a dad, supporting, never complaining, and providing tips to my boy's on the long ride home. I really wanted to be the parent I would like if I were coaching. I saw my son's getting beat every week and not by just a touchdown. Their team got beat by 20, 30, and even one game by 50 points. I kept coaching them up in the yard and motivating them to get better and avoid the big let down.

Anyways, our team was 0-12 during the season and drew the #1 seed undefeated team "Colts". The coach came over to the team and said, "My oldest son's team has a game at the same time and I wanted to ask if any of the dads would like to coach this game?" I looked at other parents and they were talking about going to lunch after the loss and others saying, "What a joke". The parents basically gave up on their players, the coaches, and ultimately the team.

I took this as my opportunity to accept the challenge and to make a long story short, we got 30 minutes to warm up. I switched up the Quarterback with my son. Not because he was my son, but because the kid had an arm and I knew it from throwing in the yard. I showed them the cover 3 shell and told them nothing gets over the top of your head and if your on the corner no running back gets to your outside. My little, undersized, and otherwise bottom of the league team went 4-0 in the tournament and won out. the other team parents were complaining about our use of the no huddle, yes; a no huddle in 30 minutes of practice and did not think the rules allowed for running back passes. We got the Big Trophy, medal's, and most of all confidence. We shocked the league and the coach said, "I thought my wife was joking." His son who was normally running around in circles had a nice game with 2 catches, 1 pick, and got his first flag pull of the year. He asked how I managed to turn it around and  I told him, "Coach, I used motivation to get them to believe, then once they believed I asked them to play hard or we would all be at Dairy Queen by 10:00AM. I preached to these boy's and said, "Who would like Dairy Queen at 10:00AM when we could wait till after the championship and get Ice cream Sunday's and Coney Dog's because it's dinner time.

These little kid's bought into it and from the first snap we started passing the ball, running the ball, ripping flags, blitzing, juking, high fiving each other, and dominated.

I was hooked on coaching from that point and have coached every year since then with a passion. I figure if I can find a way to score the ball and figure out how to stop the other team from scoring the Rock, then I could coach forever!

My next 5 years included coaching in MYFL (Youth Organization in Indiana) and several All Star Teams. This coaching journey progressed to strength and conditioning coach for the local high school. Finally, I decided to coach an "Elite" Program for Team Indiana in order to compete for the National Championship.

My passion in life includes, being a father, brother, husband, coach, and youth sports advocate. My favorite sport believe it or not is Tennis! When I was an adult in my late 20's I learned the game and studied the sport to progress to my highest rating of 4.5..... I was Captain of the Tennis Team in Jacksonville Florida for CT BROWN and dreamed of being the oldest player in history compete in the US OPEN. (This never manifested). My hobbies include lifting weights, writing, mentoring, coaching, teaching, networking, and everyday as if it were my last.