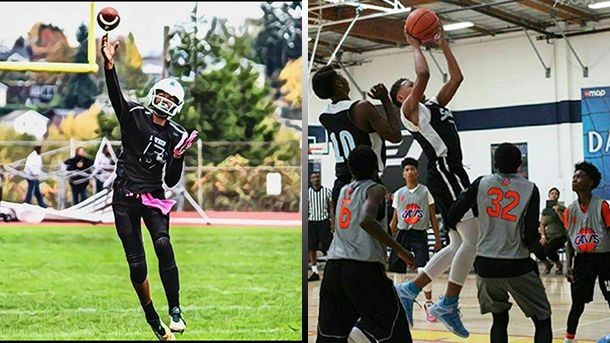 Seattle is known for having some of the most elite talent in the nation, both on the gridiron and hardwood.

Class of 2021 ATH Paolo Banchero, who excels in basketball and football, is next in line in the Emerald City as he looks to follow in the footsteps of his parents.

Banchero’s mother Rhonda held the University of Washington all-time scoring record for nine years and ranks third all-time in rebounds. She was the first Husky to be selected to the WNBA.

Banchero’s father Mario was a tight end at University of Washington.

Paolo can certainly attribute his genes to his parents as he is rapidly growing each year. Banchero currently checks in at 6-foot-5 and 200 pounds.

Banchero began playing basketball at the age of four and took up football when he was six. He's currently being identified as one of the nation's top talents in both sports.

“With football I like being in control of the game. Basketball I like competing on both sides of the ball,” Banchero said. “Basketball definitely gives me an advantage when it comes to being mobile and having good feet. Football helps me with leadership on the court I'd say.”

Banchero is grateful to have parents that bring a wealth of experience as he navigates through his athletic career.

“It helps a lot,” Banchero said. “Not just only when it comes to sport-specific advice, but also just advice about life and how to handle certain things on and off the court/field.”

On the football field, Banchero plays quarterback and free safety. Banchero guided FBU Seattle to a third place finish at FBUNC in 2014 and followed that up with a pair of second place showings in 2015-2016.

Banchero demonstrated his passing abilities with 200 yards and three TDs in a victory at the 2017 FBU 8th grade All-American game.

“Capping off the year at the All-American game really showed how much he grew,” Zuri Hector his coach at FBU Seattle said. “He really progressed and capitalized a lot on that game.”

Banchero gave plenty of credit to the FBU environment for challenging him.

“FBU has helped a lot. The level of competition was crazy,” Banchero said. “It pushed me to do things that I didn’t know I was capable of.”

Hector also coached Banchero during the fall league. Hector believes that being a two-sport athlete is advantageous.

Much like his favorite QB Russell Wilson, Banchero is a dual-threat on every snap.

“I think it helps him tremendously,” Hector said. “He had the athleticism because he’s played basketball since a young age. Also his footwork, dexterity and even his vision has helped quite a bit to translate to the football field.”

Banchero made such vast development that Hector gave him the reigns to make audibles and adjust plays at the line of scrimmage. Hector says Banchero is an intelligent kid who has a great grasp of understanding the X’s and O’s.

“That’s a huge advantage at this age. Very few coaches trust to do that,” Hector said of giving Banchero audibling capabilities. “It really allowed us to open the playbook up.”

Banchero is the ultimate field general, as he’s constantly ensuring everyone is lined up correctly.

“He really grew into being a leader on the field,” Hector said. “Being a quarterback can be pretty demanding. Because he learned a lot of the mental aspects of the game, he really grew as a player so he was able to help his teammates as well.”

Defensively, Banchero is equally competent at using his IQ and long stride to cover the field.

“When he converts over to the defensive side he becomes a quarterback for the defense,” Hector said. “He’s got great vision and great range based on his length.”

On the basketball court, Banchero possesses a wide array of skills..

Banchero was the 2021 MVP at the 2016 EBC Washington Camp. Banchero took home the award by knocking down 3-pointers, smoothly handling the ball, dishing out assists and crashing the boards.

“It was great, I love that camp,” Banchero said. “I’m looking forward to going again this year.”

Daryll Hennings is Banchero’s coach for the Seattle Rotary. Hennings has coached the best of the best in Seattle such as Jamal Crawford, Nate Robinson, Marvin Williams, Rodney Stuckey, Aaron Brooks and Zach LaVine.

“His biggest asset is his versatility. He can do a little bit of everything,” Hennings said. “That’s what makes him the leader of the team. Wherever there’s a hole we can plug him in and he’s able to contribute for us.”

Hennings has witnessed how Banchero’s game has evolved as he’s grown in the past couple years.

Banchero says he’s working to improve his shooting and defense.

“He’s gotten better at every facet,” Hennings said. “He’s always been able to pass really well and shoot the ball relatively well. Now he’s adding his back to the basket game a little more and he’s able to finish in the paint a little easier because of that size.”

Hennings says Banchero ‘‘garners the respect and adulation from him peers.”

Banchero is well-received by his teammates in both sports because he looks out for them in every situation.

“During games and practices I try and make sure that everyone is going hard and that we're on our P's and Q's,” Banchero said. “But there’s  times where my teammates do the same for me and that is why I consider them brothers. Off the field/court I try and give them advice when they're in tough situations and make sure that they aren't doing anything stupid in public or on social media.”

Banchero’s humble nature is even more present when he describes what it means to him to earn national attention for basketball and football.

“It means a lot. The fact that people are noticing and recognizing my talents is great,” Banchero. “But at the same time I know that none of this means anything really.”

Banchero’s ambitions outside of playing are to either become a coach or a sports broadcaster.

His parents take great joy in the fact that their son is establishing a name for himself. They know that as long as Paolo continues to be diligent in his approach that long-term success is attainable.

“We are both very proud. More from the sense that he sets goals and works hard to achieve them as opposed to being good at sports,” Mr. Banchero said. “He understands that he will need to work very hard and overcome many obstacles to make his dreams come true.”