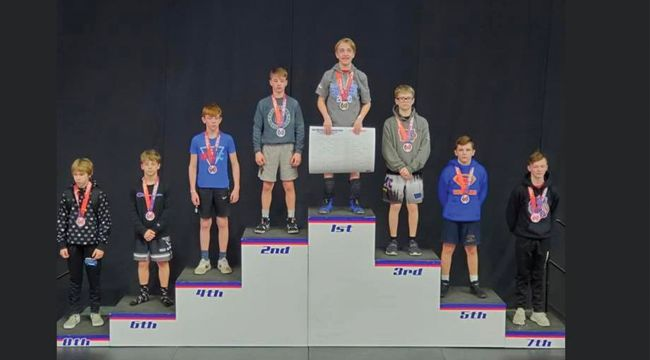 Iowa AAU Wrestling hosted their annual state championships this past weekend as more than 620 7th and 8th grade wrestlers from across the state competed in the event.

In the 95-pound bracket it was Carter Freeman of Sebolt Wrestling who dominated his weight class. He posted a perfect 5-0 record which included one victory by fall, two by tech-fall and two others by major. He won the gold when he defeated Cale Seaton of Iowa City Matpack 10-2.

Colin Falck of DC Elite dominated the 115-pound bracket as he won four of his five boust by fall. He took home the top spot when he pinned Andrew Price of High Altitude Wrestling in 2:23.

Lucas Kral GHV Mat Club went unscored upon as he captured the 120-pound title. He won his first three bouts of the tournament by shutout tech-fall before picking up a 6-0 decision and a 10-0 major over Austin Evans of High Altitude Wrestling in the championship bout.

In the 135-pound bracket it was Logan Bruxvoort Ubasa put on a strong performance. Bruxvoort won four of his five bouts by fall which included his championship match where he pinned Holden Hansen of SE Polk in 1:16.

Max Daniel Magayna IAWC may have put on the strongest performance of the event as he pinned his way to the 160-pound state championship. He won all four bouts by fall which included two in the first period. He took home the title when he defeated Chase Ackerman of Wapsie Valley Wrestling in 2:34.

In the 215-pound bracket it was Jase Wilmes of Clarinda Elite who claimed a 2020 state championship. He won four of his five bouts by fall which included his championship victory where he defeated Jack Dorfler of Ankeny Wrestling in 4:22.

Here is a look at the top place winners in each of the 7th and 8th grade brackets.