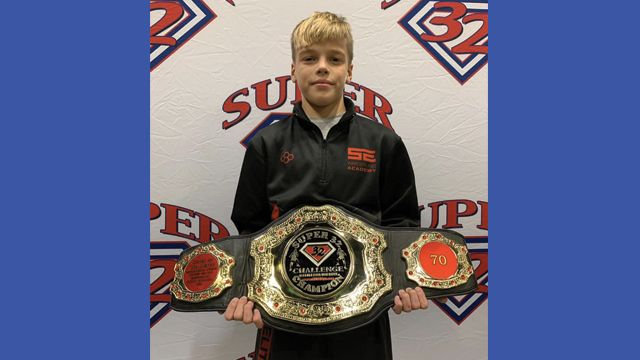 The Super 32, one of the toughest tournaments of the year, took place this past weekend as more than 450 middle school wrestlers competed in the event. This event draws top wrestlers from all over the country and the talent and action did not disappoint this past weekend.

Let’s take a look at the top place winners in each of the middle school brackets:

Neal Krysty of Ohio posted a perfect 4-0 record as he took home the 70-pound championship. He defeated Keanu Dillard of Pennsylvania in the title bout 4-3. Taking home the bronze was Cadell Lee of Virginia who defeated Evin Gursoy of New York 4-1.

Cooper Hilton of Tennessee won his first four bouts by shutout before he defeated Javaan Yarbrough of Ohio in the title bout 6-2. Winning the consolation finals was Chase Van Hoven of Virginia who defeated Lukas Littleton Mascaro of Pennsylvania 4-0.

One of the top youth wrestlers in the Pennsylvania, Bo Bassett, dominated the 80-pound bracket. He won his first three bouts by tech-fall before picking up a 4-0 decision in the semifinals and then a thrilling 4-2 sudden victory over Nathan Desmond of Pennsylvania in the finals. Winning the bronze was Samuel Herring of Tennessee who defeated Isaia Cortez of California 2-0.

Seth Mendoza of Illinois won five straight bouts as he captured the 85-pound belt. He took home the top spot when he defeated Luke Lilledahl of Missouri 5-1. Jax Forrest of North Carolina won the bronze with a 7-5 victory over Aaron Siedel of Pennsylvania.

Aiden Valencia, another top youth wrestler, dominated the 90-pound bracket as he won all five of his bouts by shutout. He took home the gold when he defeated Paul Kelly of Arizona 6-0. Carter Freeman of Iowa used a 7-0 decision over Noah Nininger of Virginia in the consolation finals.

PJ Duke of New York upset top-seeded Anthony Knox of New Jersey as he pinned Know in 3:14 to win the 95-pound belt. Taking home the bronze medal was Nikolaus Oneill of Pennsylvania as he defeated Jaxon Joy of Ohio 7-0.

Taking home the 100-pound championship was Matthew Lopez of Connecticut. He defeated Dillon Campbell of Ohio by a score of 4-0. Wrestling back to win the third place prize was Kollin Rath of Pennsylvania as he defeated Joseph Simon of Missouri 4-0.

Austin Hibler of New Jersey put on one of the most dominating performances of the tournament as he won all five of his bouts by fall. He took home the championship belt when he defeated Billy Dekraker of Virginia by fall in 2:40. Omar Ayoub won the consolation bracket with a 4-3 decision over Mekhi Neal.

Taking home the 112-pound championship was Matthew Henrich of New Jersey. He posted a perfect 5-0 record which included a 5-1 decision over Dominic Federici of Pennsylvania in the title bout. Wrestling back for third was Jonathan Fuller of New Jersey who defeated Judah Aybar of Maryland 4-3.

Nicholas Kunstek of Pennsylvania avenged his third place finish from a season ago as he won the 120-pound title with a 3-0 shutout over Latrell Schafer of Georgia. Joseph Sealey of North Carolina defeated Aeoden Sinclair of Wisconsin in the consolation finals 6-3.

Jude Correa of New Hampshire dominated his bracket as he put on one of the most dominated performances during the event. He posted a perfect 5-0 record which included four straight victories by first period fall and a 8-0 major over Conner Harer of Pennsylvania in the championship match. Wrestling back to win the bronze was Jeremy Ginter of Ohio who defeated Jaydon Robinson of Illinois 4-2.

Paul Ognissanti of Maryland defended his Super 32 championship as he posted a perfect 4-0 record. He won the title when he defeated Kael Voinovich of Ohio 5-2. Ryan Garvick of Pennsylvania won the bronze with a 4-1 decision over Luke James of Ohio.

Sawyer Bartelt of Florida defeated Max Daniel Magayna in a tight bout 2-1. Bartelt used a takedown with :22 seconds left in the match to secure the victory. Winning the bronze medal was Harvey Ludington IV of New Jersey who defeated Pantaleo Varga of New Jersey 1-0 in the consolation finals.

Taking home the 157-pound championship was Brock Kehler of West Virginia as he defeated Parker Ferrell of Virginia 6-0. New York’s Elijah Diakomihalis won the third place prize with a 3-2 victory over Gunner Henry of Indiana.

Winning the 180-pound championship was Carter Neves of Ohio who defeated Koy Hopke of Wisconsin 7-5. Wrestling back to win the consolation championship was Ethan Williams of North Carolina as he defeated Ayden Morris of West Virginia 8-0.

Sean Kinney of Pennsylvania won the 235-pound bracket with a 1-0 decision over silver medalist Dillan Johnson of Illinois. Samuel Murphy of Missouri won the bronze when he defeated Johnny Slaper of Ohio 3-1.