How Jensen Beach transformed into a national mecca for youth sports

How Jensen Beach transformed into a national mecca for youth sports 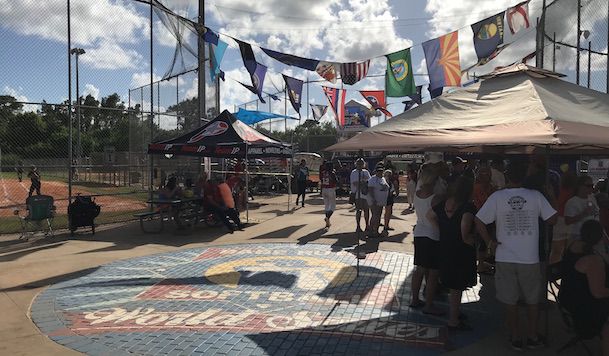 The Babe Ruth World Series is the premier event for youth softball, so it’s only fitting that a beautiful venue such as Pineapple Park in Jensen Beach, Florida is the host.

However, if it wasn’t for Jess Cusimano’s efforts, the tournament wouldn’t be in the Treasure Coast.

The small beach town in Martin County was a hidden gem until the daughter of Pineapple Park program director Mike Cusimano approached the Babe Ruth task force while she was in high school.

The Jensen Beach Wildcats 16u program coached by Cusimano won the championship last year and finished runner-up in 2018.

Also for the first time this year, Jensen Beach is hosting the Cal Ripken Baseball tournament for 8u, 9u and 11u, making it three full weeks of softball and baseball in Martin County.

Cusimano explains the goals for the future.

“We’re going to continue to add teams,” Cusimano said. “We’re hoping to have well over 100 teams next year.”

The out of town teams fell in love with the paradise perks of Martin County. In total, there were 25 states as well as two teams from China represented in this year’s tournament.

“The folks that came in loved it. What made it appealing is that we are a vacation destination,”  Cusimano said. “So therefore the teams that came in they spend a ton of their time by enjoying the beach, the restaurants and all the things they would at a normal summer vacation. They don’t have to just play softball. They can bring their families out and have a great time.”

Cusimano raves about the economic impact of the Babe Ruth World Series for Martin County.

“I think we did 7 or 8 million last year and we’ll probably push 10 million this summer,” Cusimano said.

Cusimano says there’s been “basic talks” about building out and enhancing Pineapple Park as a result of the overwhelming success from hosting the Babe Ruth World Series.

The behind the scenes prep work to host a tournament of this magnitude is massive.

“Getting things ready is full time and year round with volunteers and organizing sponsorships, working with parks and recs to get the upgrades done on the fields,” Cusimano said. “The tournament really wears down the fields so it takes a lot to replenish it.”

Cusimano expressed his gratitude towards everyone involved in the process.

“I want to thank Martin County Parks and Rec for all they did. I want to thank the Treasure Coast Sports Commission in working side by side with us to put this event on,” Cusimano said. “I want to thank Rob Connor and the entire Babe Ruth task force for the incredible job they did day in and day out to make everything run so smoothly. It was such a great event.”

Cusimano welcomes everyone to make their way out to the Treasure Coast to discover unlimited fun.

“We’re gotten incredible feedback from the teams. They love the field conditions, our beaches, our restaurants and the warm feel of our community and how we welcome them with open arms,” Cusimano said. “It’s a great little surf town community to visit. Come out and join us.”