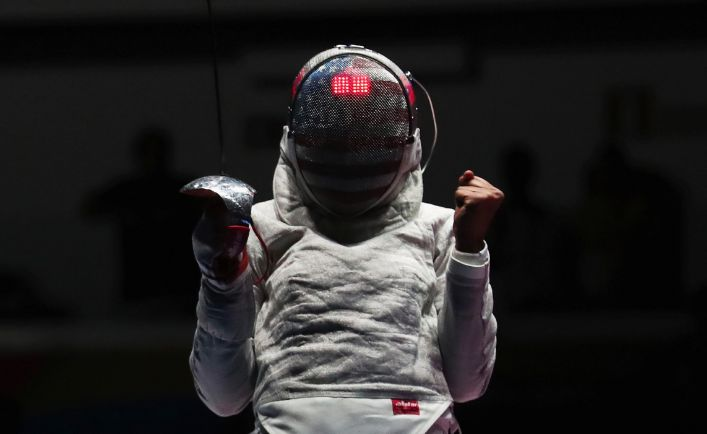 This article was submitted by a Youth1 reader.

Zoe swaggered into my life when she was nine years old.  I knew immediately that there was something special behind her penetrating gaze and confident gait.  She was skinny, tiny, and was trying her best to hide an enthusiastic spirit which was quite fearful of embarrassing herself.  These are not the traits that tend to impress most coaches - they value power, size, strength, and confidence that approaches arrogance.  However, I saw behind those dark eyes a personality of unlimited potential, and I knew immediately that she would reach any goal she set for herself with just a little help.

In fencing, it is not always the biggest, strongest, fastest or even the most skilled who become champions.  Success is defined more by pure will, discipline, creativity, and the ability to be one’s true self in the face of all obstacles. Those are the qualities that cannot be taught, just as an offensive lineman cannot be coached into growing to gargantuan proportion.  I was confident that we could, in time, make Zoe strong enough, fast enough, and confident enough to let her real self shine through.

It has not been easy.  We have had some successes before this nationals, but we have had ten bitter disappointments for every bright, fleeting moment.  Through it all, Zoe never gave up. She never listened to the voices inside and outside that told her she couldn’t, or that she wasn’t good enough - even that she was ”trash” at age 11 and 12.

Her indomitable spirit and personality always asserted itself when things looked their bleakest.  Right before this nationals at our training camp, Zoe and I had our first major interpersonal issue as she was trying to assert herself and break out of the imaginary prison so many of us live in - a prison of expectations, politesse, and doubts borne by the winds of the the unkind words of others that echo in all of us.

True to form, Zoe defined herself, asserted herself, and pushed past her boundaries.  She realized that she was doing this for herself - not for me, or her family, or to gain the approval of peers or anyone else.  The moment she stepped into that convention center in St Louis, I could feel the energy around her was totally different. Mature.  Self-assured. Powerful.

In her first event, she had a disappointing 15-13 loss against a junior world team member, aged 18.  However, she felt the difference in herself. Two days later, she placed 11th in the Div 1 open event, which included several internationally ranked fencers and three members of the USA Senior National Team.  In the cadet event, no one even came close to her, despite controversial refereeing. The average differential in her matches was 15-8 - she was literally twice as good that day as anyone in her way, most of whom were two years older than her and who had many titles and achievements, themselves.

Zoe’s goal at this point is simple - to be the best she can be.  She has probably wished on every birthday candle since age 9 to make the Olympic team in 2020 or 2024, but she is starting to see that she can be much more than a team member.  Zoe is, at 14, my hero - part daughter, part student, part sister, and sometimes these days, even part friend. But one thing is true and always has been - she is my inspiration to be the best coach I can be, and my success and that of all my other students - we took home 5 national medals at that tournament and 13 in the past 12 months with a roster of 12 -  is inextricably linked to her drive, passion, strength, and love for this quirky sport with pretend swords.

Zoe is also passionate about music.  She is a strong though reluctant violinist who is now learning guitar.  She is also a hip-hop connoisseur who enjoys classical and jazz almost equally.  She dabbles in the visual arts, and is a loyal and true friend to her peers.

FInally, she has a martial arts background (black belt in Tae Kwon Do) and I have been teaching her boxing and Muay Thai for the past 12 months. She has a very fast and nasty right hook.