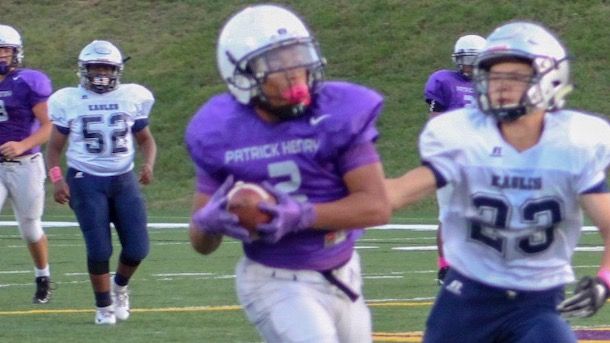 Among the standout players from the very talented 2023 class is Virginia native Jerel Rhodes II. Rhodes is a bruising football player with big time playmaking ability on both sides of the ball.

Last fall, Rhodes was named to the 2018 edition of Youth1's annual Elite101 rankings. The latest edition of the Elite101 featured last year's crop of rising 8th graders from the 2023 class. Rhodes came in at #96 on our rankings, but frankly he's proven that he's worthy of a higher slot.

"The energy," Rhodes said enthusiastically about his favorite part of playing football.

"When I am on the field, I feel like I am free, with nothing to worry about except for ringing up the scoreboard, and playing shutdown defense. That "switch" cuts on within, and it doesn't turn off until I leave the field," he added.

Standing at 5'8 168 lbs., Rhodes is a problem with the ball in his arms. His combination of speed and power is lethal, and defenders struggle to contain him once he gets out of the backfield. He has no problem running around or through defenders. His versatility allows him to make plays catching the football as well.

"Running backs are very instrumental in moving the chains. Running Backs are the players you see hurdling a corner back, or bouncing to the sideline for a 80 yard Touchdown. That's why I love the position, it is thrilling," Rhodes said.

On defense, Rhodes is a tough outside linebacker that is able to quickly diagnose the offense's play. He's know how to find the ball carrier and lay down a big hit.

"Currently, I play RB and OLB. I am hoping to switch my defensive position to Free Safety. I enjoy RB and LB because they are very detrimental to both sides of the ball," Rhodes said.

"I have played both inside and out, and my favorite is OLB. The outside linebacker position is one that allows you to get into a 1 on 1 coverage situation, as well as the opportunities to get down in the trenches in a dogfight! I enjoy all of that," he added.

Rhodes recently participated in NextGen's invite-only main event, The Show, where he was one of the best athletes on the field from the 2023 class. This was his second consecutive appearance at The Show, which speaks to how his talent is viewed.

His ability to be a standout at an event with so many other top talents from around the nation is a testament to Rhodes' supreme talent.

"Getting an invite to "The Show" speaks volumes for my game and for any other invitee. It is a guarantee that you will be pushed to play at an elite level," Rhodes said.

"The competition is top level and it brings the best out of me," he added.

Rhodes is both a vocal leader and an athlete that leads by example. He believes that his leadership is one of his strengths.

"My strengths really show up with my speed, knack to find the ball, and my ability to be a leader. Those three things help me on offense and defense. It comes in many ways," Rhodes said.

"Rather it is using my speed to break away from pursuing defenders while scoring a TD; Or, the ability to zero in on a back or receiver before the ball gets to them. I believe my strengths work together on both sides of the ball to make me the player that I am. I always try to lead out in spirit as well as in play when I hit the field," he added.

As he looks to take his game to the next level, Rhodes is working diligently to hone his craft. It's something he takes great pride in.

"I am constantly working to improve my footwork, speed, and strength. Those are the three areas where you can always get better, which also catches the attention of scouts and coaches," Rhodes said.

"I have to improve my physical game by hitting the weight room. I know that is the place where it will all begin. I also want to increase my Football IQ in every way possible. I know that my natural talent alone will not be enough," he added.

RB/LB Jerel Rhodes has proven himself to be among the top athletes from the 2023 class. His ability to dominate a game on both sides of the ball is impressive. As he continues to work on his game, the sky is the limit from here.

For more on Jerel Rhodes II, check out his Youth1 Media Profile -> here.