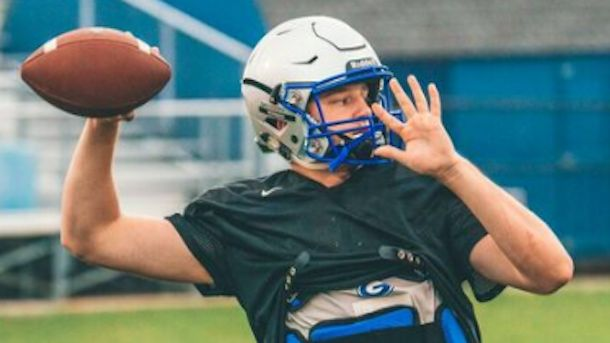 Darson Herman is one of the best players from the Georgetown, Texas area in the Class of 2022.

The 6-foot-3, 215-pound Herman, who attends Georgetown High School, is a dynamic player that works as a quarterback and safety.

Herman, who was a member of Youth1’s Freshman450 list last year, explains his strengths as a quarterback.

“Some of the strengths I have on the field is being able to run the ball and being able to extend plays outside of the pocket,” Herman said.

Herman shares the aspects of playing quarterback that he enjoys.

“I enjoy having the leader role and being able to control the game however I want it to go,” Herman said.

“I look up to Tom Brady because when he walks on the field he already knows he is the best player on the field and that he is going to win the game,” Herman said.

Herman has a strong passion for the game of football. This is shown through his actions and behavior on the field.

“I love the rush of excitement when making a great play and making memories with my friends and teammates,” Herman said.

Herman does his best to show strong leadership to his teammates. It’s important to Herman that he sets a positive example on his peers.

“I show leadership by always encouraging my teammates to do their best by always finishing first and giving my best effort to do everything right to the best of my ability,” Herman said. “I tell my teammates  to go to every workout and to not just go through the drills, but get something out of it by trying your best.”

Herman has improved in many aspects since being selected to the Freshman450. Herman excitedly lists the strides he’s made in the last year.

“I strive each day to perfect my mechanics as a football player and to learn the game of football as much as I can, so my teammates can learn from me,” Herman said.

“I am participating in spring ball for my high school and I am working out outside of school to perfect my mechanics as a quarterback so I can help my teammates around me get better,” Herman said.

“I have been honored to be ranked as one of the top four quarterbacks in the best football state in the country, along with securing a spot on a varsity football team,” Herman said. “I am motivated to continue improving so that I can reach my potential as a player.”

Herman outlines what he needs to work on to take his game to the next level.

“I am working on the knowledge I have of the game of football and my accuracy as a quarterback,” Herman said. “Each day I work on throwing the ball more accurately and training to get faster so I am able to play at the next level.”

For more on Darson Herman, check out his Youth1 Player Profile -> here.